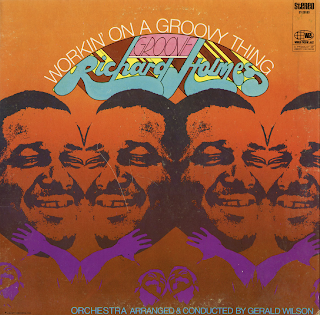 From the inside cover: In 1961 Gerald Wilson recorded his first big band album for Pacific Jazz; it was called "You Better Believe It." The West Coast jazz milestone featured a newcomer on organ, Richard "Groove" Holmes. Groove had only recorded twice before, one LP featuring Ben Webster and Les McCann and the other with the great Gene Ammons. The high spot of their collaboration on the "You Better Believe It" album was Gerald Wilson's composition "Blues Fo Yna Yna," which became a jazz standard.

It's wonderful to hear the rich Groove Holmes sound reunited with the unique Gerald Wilson touch – the wait was well worthwhile. This brilliant combination should definitely be an annual jazz experience.

Groove is supported by some first-rate musicians on this sensational album, including: Dennis Budimir on guitar; Ernie Watts on alto, fresh from a year on the road with the Buddy Rich band; Tony Ortega, a mainstay of the Gerald Wilson orchestra; a newcomer, Bill Peterson on electric trumpet and Paul Humphrey, a great swinging drummer to keep everything in the right groove.

Isole Natale
Do You Know The Way To San Jose
Workin' On A Groovy Thing
Oklahoma Toad
Hig Blues Pressure
Listen Here
In And Out
Dreams Of Everyday Housewife
Rhythm & Groove
I Can't Stop Dancing
Posted by By Mark Betcher at 6:29 PM