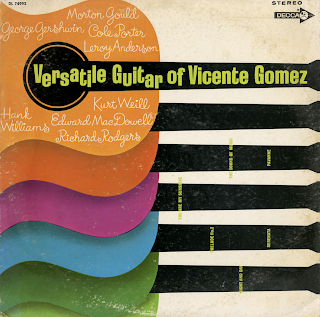 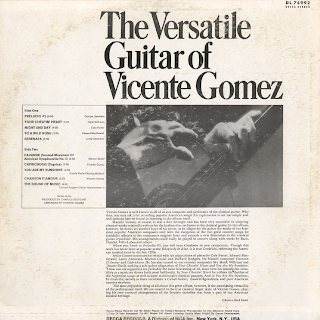 From the back cover: Vicente Gomez is well known to all of us a composer and performer of the classical guitar. Why then, you may ask, is he recording popular American songs? An explanation is not too simple and will perhaps best be found in listening to the album itself.

Maestro Gomez, of course, is also a fine arranger and has been very successful in adapting classical works originally written for the keyboard or orchestra to the classical guitar. In this album, however, he shows yet another facet of his talent, as he adapts for the guitar the works of our foremost popular American composers and, with the exception of the two great country songs, he faithfully adheres to the composer's original form and extends a new dimension to the classical guitar repertoire. His arrangements could easily be played in concert along with works by Bach, Handel, Villa-Lobos and others.

When you listen to Preludio #2, you will hear Gershwin in new perspective. Though this work has never been as popular as the Rhapsody in Blue, it is true Gershwin, reflecting the American musical scene in the late 1920s.

Senor Gomez continues his recital with his adaptations of pieces by Cole Porter, Edward MacDowell, Leroy Anderson, Morton Gould and Richard Rodgers. He himself composed Chanson D' Amour and Caprichoso. He has also turned to our country composers like Hand Williams and Jimmie Davis, making a solo guitar adaptation of Your Cheatin' Heart and You Are My Sunshine. These two arrangements are probably the most interesting of all, since here his remarkable versatility as a musician shines forth most brilliantly. In Your Cheatin' Heart he utilizes the rhythm of the Argentine tango as well as some traditionally classical passages. And in You Are My Sunshine, he treats the melody to three variations: a Cuban bolero, classical figurations and pure American country rhythms. – Charles Bud Dant

Preludio #2
Your Cheatin' Heart
Night And Day
To A Wild Rose
Serenata
Pavanne (Second Movement of American Symphonette No. 2)
Caprichoso (Caprice)
You Are My Sunshine
Chanson D'Amour
The Sound Of Music
Posted by By Mark Betcher at 9:11 PM