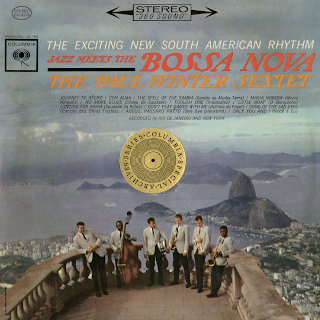 From the back cover: The Paul Winter Sextet, formed of students in universities of the Chicago area, won the Georgetown Intercollegiate Jazz Festival in 1961, and its pianist, Warren Bernhardt, was chosen the best musician in that festival. Shortly before that, its baritone saxophonist, Les Rout, was chosen the best musician on his instrument at the Collegiate Jazz Festival, held at Notre Dame University. A few months later, they were selected to make a tour of Latin America – twenty-three countries and 27,000 miles – for President Kennedy's Cultural Exchange Program. After a discussion with the group's members, I decided to take a sabbatical to go with them as tour manager. The night before we left, I played them a record by Joao Gilberto, a brilliant young Brazilian singer and guitarist whose work utterly fascinated my (as, in fact, it had begun to fascinate many jazz musicians throughout the United States).

We left New York City February 4, bound for Haiti. When we entered Brazil through the south (at the city of Porto Alegre) on May 25, the social unit – if we must use that term – had been formed. We'd been through a great deal together: Communist objections to jazz; the folly of a few U.S. government officers; appalling plane flights in, around, through, and over the Andes in planes that should have been retired long ago; dysentery; ugliness, and a great deal of beauty, both topographical and that which you find in the human spirit. We had come to feel the same way about many things, including the somber reality of the Communist threat.

And then Brazil, a nation of breathtaking scenery, vast scope (it is bigger than the continental United States), beautiful women and so much music. Brazil has, I believe, the richest natural musical culture of any country in the world. And out of it has lately grown the music known as bossa nova.

This is what Joao Giberto has been doing on the disc. In fact, he is known in Brazil as "the pope of bossa nova." We heard this music everywhere, and the members of the sextet began the effort of digesting its rhythmic and melodic principles.

The group played thirteen Brazilian cities during a long and gorgeous month in that country. In one of men, the Communists staged a near-riot (they're very afraid of jazz, which is the embodiment of free expression) until the audience and police enforced silence upon them.

Meanwhile, the group was becoming tighter and tighter as a musical, as well as a human, unit. The rhythm section was striking remarkable grooves, and the horns were achieving lovely blends. Everyone's solo capacity has grown, particularly Paul's trumpeter Dick Whitsell's and pianist Warren Bernhardt's. I became convinced that Warren is the best pianist to come into jazz since Bill Evans.

We went from Brazil to British Guiana, then to Venezuela, then home. We were all homesick and glad to reach Idelwild. But the seeds of nostalgia for Brazil were already growing.

The group was off for a month after that and during that time Paul, Warren and Richard did a great deal of writing. In early September they returned to New York to record.

As I sat in the control booth with John Hammond, I was proud of them. It was hard to believe that they had been a college amateur group a year ago (albeit a very good one). And most to the point; of all the U.S. attempts to play bossa nova I'd heard since we got home, this was the only one that really captured its essence – its sensitivity, its subtlety. And Whitsell was capturing its fundamentally vocal character, particularly on flugelhorn. – Gene Lees