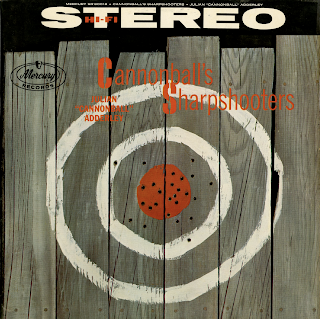 From the back cover: The Tampa-born altoist was in high school in Tallahassee when the drummer of a band they had – seeing what a noble trencherman the maestro was and having no acquaintance with bonafide cannibals but a fine ear for phonetics – dubbed Julian "Can-E-ball." This mispronunciation, like a strange word introduced into a foreign tongue, was promptly twisted into what it should have been all along. In effect, it describes one of the most forceful saxophone styles in jazz today.

Cannonball perfected his style by listening to tenor saxophone players. He cited as examples, Hawk Webster, Pres, Chu Berry and Don Byas and then said, "I guess it was altered a bit with the realization that there was a Charlie Parker – as a kid I used to copy his solos – but not in deliberate simulation of him." And in fact the best approach to the Adderley alto is to listen without prejudice, for its own uniqueness of sound and style.

Like Hawk and other mainstreamers he has a way of blowing and phrasing that combines definition (attack) with fluidity; these passages are contrasted to slower, more legato ones. But there are many other facets to his style. For example, he'll purposely smear runs of notes and the effect is like tone clusters. Or take the lovely tone of his alto on What's New, where he creates an ornate, even baroque, structure. Beautifully played, and very ballad, with the swing strongly felt, though not in the forefront.

The two brothers Adderley come of a musical family – their father was a jazz cornetist – and during high school years Julian studied brass and reed instruments with Leander Kirksey, who taught music at Florida A&M. Kirksey had worked with such Florida bands as those of Eagle-eye Shields and Alonzo Ross – in both of which Cootie Williams and Edmond Hall played at various times – and he could play almost all instruments, including double reeds. "A very accomplished man," said Julian – "the only man I know who played that many instruments and all of them well."

Recalling that his early jazz interest was stimulated both by records and live performances, he said, "Bands – Henderson, Kirk, Lunceford, and others – used to come through on tour and there were some pretty good Florida bands – the Sunset Royal Entertainers – Dad played with them – Smiling Billy Stewart and C.S. Belton's Syncopators."

Julian became band director at Dillard high school, Fort Lauderdale in 1948 and was there until 1950 and again for a time after he got out of the service. While with the 36th Army Band from 1950 to 1953 he led the dance band. During this period both he and Nat studied at the U.S. Naval Academy of Music, Washington D.C., where just about every phase of band music was taught and taught well. Off-duty, Julian played with local groups. On assignment at Fort Know where he taught in the ban training unit, he also played with a combo. (As well as being a composer and arranger, Julian plays several instruments.)

He led his own group, off and on, from 1953 to '57. Recognition – the kind that counts for jazzmen – came his way when he sat in with Oscar Pettiford at the Cafe Bohemia (NYC) in the summer of 1956. Following that, the group that made this album won increasing attention, especially as it was noted that both Julian and Nat had something going.

Speaking of his brother Nat – who was sitting right next to him – Julian grinned and said, "I think he's one of the great trumpet players – certainly one of the most underrated. However, I'll say this, all the good trumpet players know where it is, they know him well!"

Asked how his music related to modern jazz stemming from bop, Julian replied with a touch of humor, "There's kinship – let's say it's an orderly chronological evolution." From this the talk got to the state of jazz in general, about which he remarked, "I think we're going to have a recapitulation. There are some jazz performers who are trying to lead it to the concert hall and a common ground with classical music. However – the best way I know how to say how I feel about it – I don't think Buddy Bolden would dig that too much."

Having consumed a light snack consisting of two huge corn-beef sandwiches, the trencherman from Tampa took a swig of coke and added thoughtfully, "I don't consider myself a reactionary as far as jazz is concerned – I'm a mainstream man, that's all. – Charles Edward Smith.

From Billboard - May 11, 1959: Cannonball Adderly, with his brother Nat take off on a group of standards and originals here to good, driving results. The music is modern in the hard bop vein, featuring the old, pulsating style in contrast to his quieter playing of today. (Set was waxed in February 1958.) Tunes include "What's New," "If I Love Again" and "Fuller Bop Man" and "Jubilation."

Our Delight
What's New
Fuller Bop Man
Jubilation
Stay On It
If I Love Again
Straight, No Chaser
Posted by By Mark Betcher at 7:04 PM