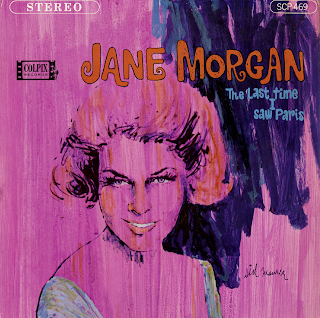 From Billboard - August 1, 1964: When it comes to the music of romance, (word obscured) and it's music cannot be equaled. Perhaps the foremost vocal delegate to (word obscured) from America and France is Jane Morgan who sounds well in both languages. (word obscured) we hear: "The Poor People In Paris," "Autumn Leaves," "If You Love Me, Really Love Me," "Domino," "C'est Si Bon" and others.

The Time Is Now
C'est Si Bon
Under The Paris Skies
Autumn Leaves
La Vie En Rose
The Poor People Of Paris
Once Upon A Summertime
Dominique
If You Love Me Really Love Me
Domino
The Last Time I Saw Paris
Petites Chansons
Posted by By Mark Betcher at 7:14 PM