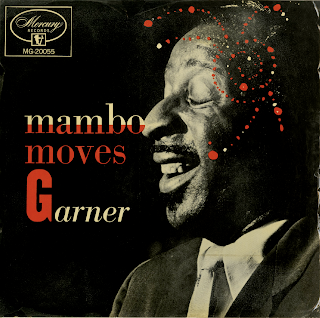 From the back cover: For some time, Erroll Garner has been regarded as a legendary fixture in the recording industry. After our first Mercury session with him (July 1954), we can only say, firsthand, that the pixie-like pianist served to embellish the legend, with his fantastic output.

Accompanied by bassist What Ruther and drummer Eugene Heard, Erroll came to the studios to cut some mambo sides, or anything else he might be in the mood to play. We were hardly prepared for the spectacular results. He waxed more than 125 minuets of music, including the selections in this album.

In this volume Erroll, for the first time in his profuse recording career, waxed in the Latin idiom. Though his work is called Mambo Moves, the title is broadly applied. In addition to several mambo improvisations, Garner plays some beguines. The entire collection swings, whether the numbers be frenetic, or slow. Throughout the album, Garner sounds like two pianos, and sometimes, like three. He is a veritable one man orchestra, most successfully welding jazz and mambo influences. Although we were at the date, we can't adequately describe the Garner magic. One has but to listen for himself.

Prior to this session, Erroll had been experimenting with mambo ideas for over a year. In planning this date, we asked Erroll whether he would consider cutting an entire album of mambo arrangements. Erroll said he'd try it, particularly if we could include Candido, the great South American bongo star, which we happily did. The resultant combination of Erroll and his own accompanists, plus Candido, resulted in what we consider to be one of the most exciting mambo-jazz collections ever issued. So often, we've had the feeling that when jazzmen played so-called Latin arrangements, they merely set forth their usual treatments and ideas, only against a mambo beat. With Erroll, we feel that he adapted his ideas and distinctive style and phrasing to the Latin conception, interplaying throughout with the bongo patterns of Candido. Indeed, the date was something to witness as well as to hear. Erroll and Candido watched each other closely, almost as if they were stalking one another, and obviously "fractured" each other many times with their inter-merging ideas. Candido tended to be restrained for the first few minutes of play, so Garner urged him to cut loose – and that he did, as is especially evidenced in Mambo Garner.

From Billboard: January 12, 1955: Altho Erroll Garner has made over a score of albums for various labels during the past decade he has rarely touched the Latin idiom. Therefore, the multitude of Garner fans will have an extra special interest in this new set. It features the irrepressible pianist and his trio in a collection of standards and three originals in the mambo mood, with a beguine or two thrown in for good measure. On three originals, "Mambo Garner," "Mambo Blues" and "Mambo Nights," the pianist shows that he can play a mambo with the same excitement and musicianship that he hands modern jazz rhythms. He is aided and inspired here, too, by bongo star Candido on conga drums, thus adding an authentic Latin touch to the disk. Some of the sides are on-the-spot improvisations, others are usually done by Garner in his club dates. Good-wax here for Garner fans.