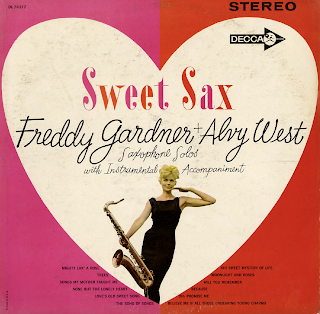 From the back cover: The late Freddy Gardner – a versatile, sensitive musician whose colorful career included a close association with the famous Duke Ellington, and who gained great success with his own orchestra – took the saxophone from its traditional status as a part of the dance orchestra, and transformed it into a solo concert instrument. Here, in his performance of such great songs as "Mighty Lak' A Rose," "None But The Lonely Heart," "Love's Old Sweet Song," and others, we find some of the best examples of the wonderfully dynamic quality of Freddy Gardner's saxophone – accompanied and enhanced by the rich sonority of the pipe organ, in the skillful hands of Malcolm Lockyer.

Saxophonist-arranger Alvy West – famous for his association with Paul Whiteman's orchestra (as featured saxophonist soloist) and his own "Little Band" – is widely known and respected not only by the vast audiences he has appeared before, but by fellow musicians as well. This album provides a marvelous showcase for the fluent technique and dulcet tones that have made him a favorite in his field.

Ah! Sweet Mystery Of Love
Moonlight And Roses (Bring Mem'ries Of You)
Will You Remember (Sweetheart)
Because
Oh, Promise Me
Believe Me If All Those Endearing Young Charms
Posted by By Mark Betcher at 6:09 PM