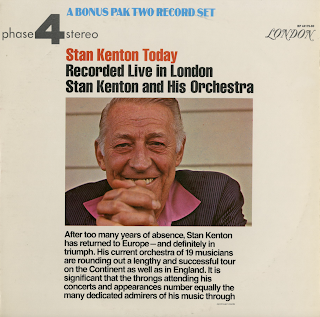 From the inside cover: The trail of musical triumphs in Europe in 1972 began in Copenhagen, Denmark, on January 12th at the Tivoli, and led through Sweden, Germany, Austria, Hungary, Spain, Italy, Switzerland, Holland and France, terminating in England. Many television and radio tapings were recorded during this tour, and will be made available at later dates to the airways. The most recent was an excellent BBC recording for colour television on the 9th February. Many concerts stand out as exceptional – Teatro La Fenice, Venice – Victoria Hall, Geneva – Concertgebouw, Amsterdam – but above all, the enthusiasm and ecstatic response in the English concerts must attend as a monumental achievement on the tour. From Nottingham to Wakefield, to London, Southport, Bristol and Farnworth, the reaction to the new Kenton was spontaneous and infectious. From the opening number, usually "We Almost Made It This Time," to the closing "God Save The Queen," the orchestra and the audience were merged in a musical experience which was fascinating and thrilling to witness. An especially high point was reached in Croydon's Fairfield Hall, where the entire concert was recorded "live" by London Records for release as a two-record set in the very near future. In some respect, these records will be a history in brief of the musical achievements of the Kenton Orchestra, including "Opus In Pastels," "Artistry In Percussion," "Intermission Riff," "Peanut Vendor" spanning the years to the current compositions such as "Malaga" "Chiapas," "Walk Softly" and "Bogota."

From Billboard - June 10, 1972: Kenton's recent and triumphant concert tour of Europe featuring his current nineteen-piece band of two years was climaxed and given an exceptional record treatment in this two-record set in live performance in London. Band displays new fire, excitement and freshness in "What Are You Doing The Rest Of Your Life," "Malaguena," "Artistry In Rhythm" and Johnny Richards' "Walk Softly," to name a few.