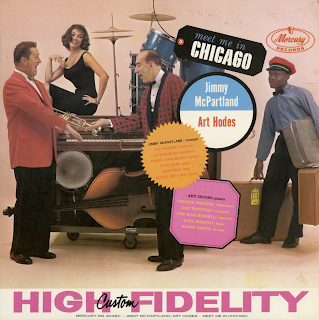 From the back cover: It is said that in New Orleans earlier in this century, bands would roll down the streets of that city in horse-drawn wagons. And that it was not uncommon for two rival organizations to meet on a street, lock the wheels of their respective vehicles together, and see who could force a surrender.

This album has that premise – put two bands side by side in a recording studio and let them lock wheels.

The groups were carefully selected. It was learned that a number of jazzmen who had a good deal to do with a couple of days. Jimmy McPartland, Bud Freeman, Pee Wee Russell and George Wettling were coming in for a concert. Men like Art Hodes, George Brunis and Floyd Bean were in permanent residence.

McPartland headed one of the contingents, with Freeman, Wettling and Bean included. The group was filled out by trombonist Vic Dickinson, also briefly in town, clarinetist Jack Maheu, whose considerable experience with the Dukes Of Dixieland should not be held against him, and bassist John Frigo, a gifted musician who fits snugly into any musical milieu.

Pianist Hodes led the other group and thus for the first time in a long and distinguished recording career got to work in a studio with Pee Wee Russell. The brash trombone of Brunis and the Spanier-like trumpet of Nap Trottier rounded out the front line. Veteran Earl Murphy was on bass and the swinging Buddy Smith at the drums.

And though this was conceived primarily as a stereo recording, with the McPartland band at the left and Hodes' group at the right, so distinctly different a sound an attack do the two bands get, you should have no trouble in recognizing who's who should you listen to the monaural version.

From Billboard - September 19, 1960: Dixieland fans will find this collection a gas. Some of the top practitioners of the art are divided into two groups, headed respectively by trumpeter Jimmy McPartland and pianist Art Hodes. Stereo permits the two groups to play off against each other as well as in unison, with splendid solos by Bud Freeman's sax, Vic Dickenson's trombone, George Wettling's drums, Pee Wee Russell's clarinet and George Burnis' trombone, among others. These fine veterans are in great form, and the disk really jumps.