Dedicated To You - Ray Charles 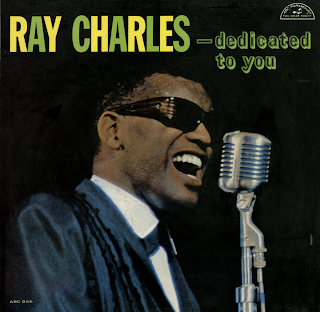 From the back cover: Six of the songs in this album feature an orchestra which includes seventeen strings, and six were recorded with a big, swingin' band. One instrumental is included (Josephine), spotlighting Ray Charles' solo piano. All arrangements, supervised by Ray Charles are by the West Coast's outstanding arranger, Marty Paich, whose list of credits include the elite of the music world. Tenor solos are y David "Fathead" Newman. Produced by Sid Feller, ABC-Paramount's director of artists & repertoire, al recording sessions were held at United Studios in Hollywood.

In addition to piano, Ray Charles is an accomplished alto saxophonist and composer of hit songs recorded by other artists (Hallelujah, I Love Her). Most of his time is spent on nationwide concert tours where he consistently plays to packed houses and cheering audiences. – Rick Ward