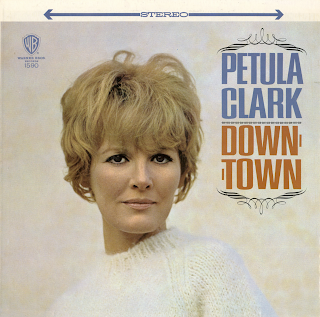 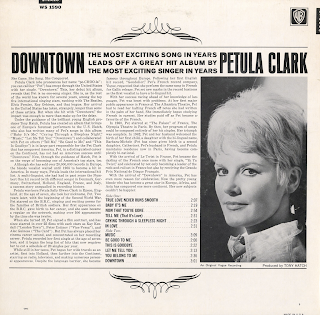 From the back cover: Petula was born Petula Sally Owen in Epson, England. At the age of seven, she took her nickname, Pet. Two years later, with the beginning of the Second World War, Pet starred on the B.B.C., singing and reciting poems for the families of British soldiers. Her first appearance on the B.B.C. gave birth to her career, and she soon became a regular on the network, making over 500 appearances by the time she was twelve.

When she turned 12, Pet signed with a film contract, and has since starred in over 25 films with such stars as Kay Kendall ("London Town"), Peter Ustinov ("Visa-Versa"), and Alec Guiness ("The Card"). But Pet has always placed her cinema career second, and concentrated on her recording career. Petula recorded her first single at the age of seventeen, and it began the long list of hits that now requires her to cut a schedule of 20 singles per year.

While still in her teens, Pet began her wide travels as an artist, first into Holland, then farther into the Continent, starring on radio, television, and making numerous personal appearances. Despite the language barrier, she became famous throughout Europe. Following her first English hit record, "Gondolier." Pet's French record company, Vogue, requested that she perform the same song in French for Gallic release. Pet set new marks in the record business as the first vocalist to have a bi-lingual hit.

With her success racing ahead of her knowledge of languages, Pet was beset with problems. At her first major public appearance in France at The Alhambra Theatre, Pet had to read her halting French off notes she had written in the palm of her hand. She immediately began studying French in earnest. Her studies paid off as Pet became a favorite of the French.

In 1960, Pet starred at "The Palace" of France, The Olympia Theatre in Paris. By then, her program of songs could by composed entirely of her hit singles. Her triumph was complete. In 1962, Pet and her husband welcomed the birth of her first child, a daughter with the bi-lingual name, Barbara-Michele (Pet has since given birth to a second daughter, Catherine). Pet's husband is French, and Petula maintains residence now in Paris, having become completely bi-national.

With the arrival of Le Twist in France, Pet became the darling of the French once more with her single "Ya Ya Twist," and celebrated by not only becoming a leader of the rock-and-roll set in France but also by receiving the Grande Prix National de Disque Francais.

From Billboard - February 13, 1965: "Pet" Clark enjoys the distinction of being the first of the British recording gals to hit the number one position on BB's chart. This album will project the star even further. The songs, mainly producer Tony Hatch's originals, are excellent. Pet sings them all with the vibrance and feeling expected of a rising young star.

True Love Never Runs Smooth
Baby It's Me
Now That You've Gone
Tell Me (That It's Love)
Crying Through A Sleepless Night
In Love
Music
Be Good To Me
This Is Goodbye
Let Me Tell You
You Belong To Me
Downtown
Posted by By Mark Betcher at 4:36 PM