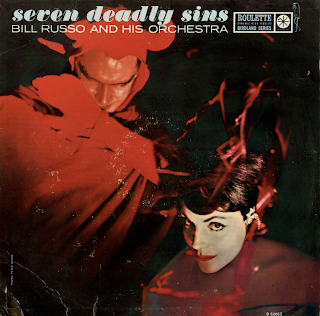 From the back cover: In defining the motivation of his present orchestra, Bill Russo termed it "an affirmation of the world and an aspiration toward the good life." Such a definition of intention is comparably valid when applied to Russo, the composer.

Identifying him as a composer is, in itself, intended to distinguish him from the songsmiths of the Brill Building, the petty riff-makers of jazz and the nihilists and obscurantists of modern classical music. As a serious composer, Russo is concerned with art and it is this concern that makes his work both demanding and rewarding on a scale that dwarfs that of most of his contemporaries.

At the age of 32 he has achieved considerable distinction. His career in music has been varied as the works he has composed. Born on Chicago's north side in 1928, he attended three grade schools, studied piano at age 5 and clarinet at 10. Despite this early training, his interest in music was mild, until he entered Senn High School. He played trumpet, tuba and trombone in the school band; he discovered jazz. With classmate Lee Konitz as added inspiration, he directed his efforts toward music and, as he was to realize a few years later, away from scholarship.

During the summers he worked with various name bands. While at Senn he (and Konitz) studied with pianist-composer Lennie Tristan. In later years he studied with Dr. John Becker (a colleague of Charles Ives, Wallingford Reigner and others), then composer in residence at Barat College. In 1947, Russo formed a rehearsal band for the exploration of various roads of jazz experimentation. For two years, the band performed in concert in the Chicago area; it recorded two 78s for the now-defunct Universal Label. During these years, Russo studied at DePaul University, Roosevelt College (now University) and the University of Illinois.

In 1950, he joined the Stan Kenton band as trombonist and composer. Between '50 and '54, he was a vital member of the Kenton crew, contributing a vast number of compositions and arrangements to the Kenton Library (many of the Russo arrangements, uncredited, have been recorded by Kenton). In '54, weary of the road routine, he returned to Chicago, making his original home his base of operations.

In 1955 he taught in London and performed in Germany as soloist and composer with the Kurt Edelhagen orchestra and the Hans Koller quintet. While abroad he composed The English Suite for British orchestra leader Ted Heath; it is a four-section concert work for jazz orchestra. In '55, too, he returned to Roosevelt to obtain his degree in English.

In 1957, Russo moved to New York, to compose and conduct. Since that time, he has been extremely active. He completed Symphony No. 2 In C, Titans, in November, 1958 (his first symphony was completed in June 1957); in mid-April, 1959; it was performed by the New York Philharmonic, conducted by Leonard Bernstein. The work was awarded a Koussevitsky Foundation grant, one of approximately 40 such grants made in the last ten years.

Early in 1960, Russo formed his own orchestra, dedicated to "the excitement of the intellect." It performed in concert at Birdland in New York and its unique sound is vividly captured in its initial Roulette LP, School Of Rebellion.

Russo has taught composition, orchestration, brass, instruments, arranging, theory and improvisation since 1947. He has written a text, composing For The Jazz Orchestra (published by the University of Chicago Press in 1961), the first of three volumes on the subject he plans to write. He has lectured on music and art at many universities; he conducted a course – The Anatomy Of Jazz – at the University of Chicago; it was a credit course in the Humanities department. He has authored articles on jazz for several leading publications. He was named Musician Of The Year in 1957 by Metronome Magazine. At the present time, he's a member of the faculty and board of directors of the School of Jazz in Lenox, Mass., and an instructor at the Manhattan School of Music.

His compositions include two ballet scores: The World Of Alcina and Les Deux Errants. The latter, written for the Festival Ballet Company (the London group headed by Anton Dolin), was debuted in Monte Carlo in 1956, with choreography by Wolfgang Brunner, decor by Dan Snyder. Russo's Music For Alto Saxophone And Strings and An Image Of Man have been recorded by Konitz.

His interests are broad in scope. They encompass literature and philosophy, the work of Tolstoy, Dostoyevsky, John Donne, Thomas Hardy, Wordsworth, Dickens, the thought of Plato and the profound theories of the late Elijah Jordan. He is fond of the dramas of Arthur Miller, but prefers films to the "psychoanalytic theatre in New York." He drinks brandy and Pernod (with ginger ale). He admires Brooks Brothers clothes and evening dress. He listens to the music of Bach, Scarlatti, Mozart, Prokofiev and Hindemith.

Russo wants to write "simply and melodically." His ambition is not concealed in a web of conformity; he wants to become a great composer and says so. "I aspire to the heights. Occasionally, I'm aware of being near the heights," he has said. Yet the heights of which he speaks are not divorced from reality. "I'd like to see music get back into contact with the world," he says. He believes that Man can be a noble creature. The purpose of his art is to assist in the creation of a better life; art, he feels, must make the world a better place. – Don Gold, Associate Editor, Playboy Magazine
Posted by By Mark Betcher at 4:19 PM