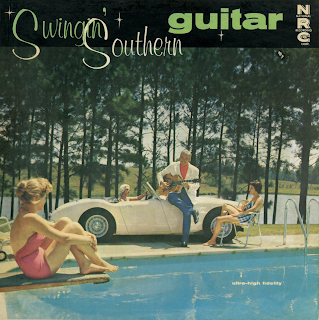 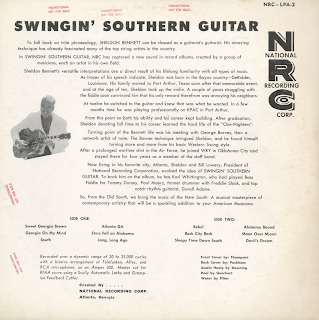 From the back cover: To fall back on trite phraseology, Sheldon Bennett can be classed as a guitarist's guitarist. His amazing technique has already fascinated many of the top string artists in the country.

In Swingin' Southern Guitar, NRC has captured a new sound in the record albums, created by a group of musicians, each an artist in his own field.

Sheldon Bennett's versatile interpretations are a direct result of his lifelong familiarity with all types of music.

As traces of his speech indicate, Sheldon was born in the Bayou country– DeRidder, Louisiana. His family moved to Port Arthur, Texas soon after that memorable event, and at the age of ten, Sheldon took up the violin. A couple of years struggling with the fiddle soon convinced him that his only reward therefrom was annoying his neighbors.

At twelve he switched to the guitar and knew that was what he wanted. In a few months time he was playing professionally on KPAC in Port Arthur.

From this point on both his ability and his career kept building. After graduation, Sheldon devoting full time to his career learned the hard life of the "One-Nighter".

Turning point of the Bennett life was his meeting with George Barnes, then a network artist of note. The Barnes technique intrigued Sheldon, and he found himself turning more and more from his basic Western Swing style

After a prolonged wartime stint in the Air Force, he joined WKY in Oklahoma City and stayed there for four years as a member of the staff band.

Now living in his favorite city, Atlanta, Sheldon and Bill Lowery, President of National Recording Corporation, evolved the idea of Swingin' Southern Guitar. To back him on the album, he has Karl Whittington, who had played Bass Fiddle for Tommy Dorsey, Paul Maerz, former drummer with Freddie Slack, and top notch rhythm guitarist, Duvall Adams.

From Billboard - December 15, 1958: Sheldon Bennett has a pleasant style of easy improvisation on guitar with these tunes, which comprise for the most part, familiar melodies. Working with rhythm support, he offers "Sleepy Time Down South," "Alabamy Bound," "Moon Over Miami," etc. Listenable wax from a talented cat.