In The Gloryland - Ken Davern And His Salty Dogs 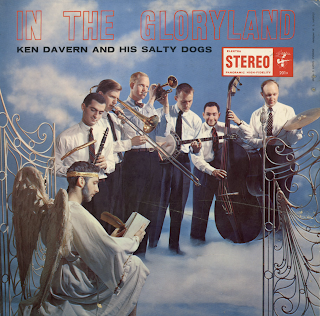 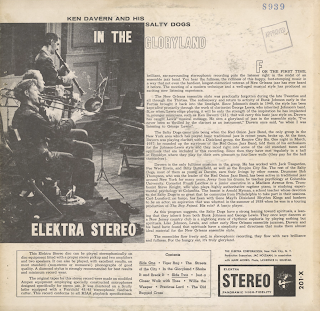 Available from online vendors, so I will not be posting a sample. Presented here to share the cover art and jacket notes excerpt.

From the back cover: The Salty Dogs came into being with the Red Onion Jazz Band, the only group in the New York area which has played basic traditional jazz in recent years, broke up. At the time, Davern was playing clarinet with a Dixieland group, the Empire City Six. One night in March, 1957, he rounded up the survivors of the Red Onion Jazz Band, told them of this enthusiasm for the Johnson-Lewis style and they laced right into some of the old standard tunes and spirituals that are included in this recording. Since then they have met regularly in a hall in Brooklyn where they play for their own pleasure to four bare walls (they pay for the hall themselves).

Davern is the only full-time musician in the group. He has worked with Jack Teagarden, Pee Wee Erwin, and Billy Butterfield, as well as the Empire City Six. The rest of the Salty Dogs, most of them as young as Davern, earn their living by other means. Drummer Bob Thompson, who was the leader of the Red Onions Jazz Band, has been active in traditional jazz around New York for many years. Away from his drums, he teaches psychology at Columbia University. Cornetist Frank Laidlaw is a junior executive in a Madison Avenue firm. Trombonist Steve Knight, who also plays highly authoritative ragtime piano, is studying experimental psychology at Columbia. The bassist is Arnold Hyman, a school teacher whose devotion to the Salty Dogs is so great that he commutes from Philadelphia to take part in their sessions. Carl Lunsford, on banjo, has been with Gene Mayl's Dixieland Rhythm Kings and hankers to be an actor, an aspiration that was whetted in the summer of 1958 when he was in a touring production of The Boy Friend. His role? A banjo player.

As this program suggests, the Salty Dogs have a strong leaning toward spirituals, a leaning that they inherit from both Bunk Johnson and George Lewis. They once kept dancers at a New Jersey country club in a nightlong state of rhythms euphoria by playing nothing but spirituals. Like Johnson, Lewis, and other early New Orleans ensemble jazzman, Davern and his band have found that spirituals have a simplicity and directness that make them almost ideal material for the New Orleans ensemble style.

In addition to the sampler, previously announced, the stereo release includes "In The Glory Land," containing traditional jazz by Ken Davern and His Salty Dogs; "The New York Jazz Quartet Goes Native," with Mat Mathews, Herbie Mann, Joe Puma and Whitey Mitchell, and "The Original Trinidad Steel Band in Stereo."

Tiger Rag
The Streets Of The City
In Gloryland
Shake It And Break It
Just A Closer Walk With Thee
Willie The Weeper
Precious Lord
The Old Rugged Cross
Posted by By Mark Betcher at 4:26 PM