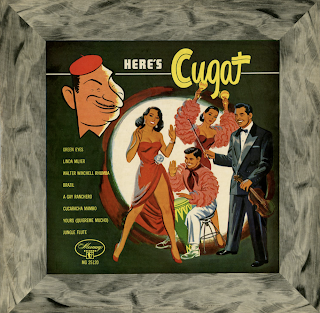 Available from online vendors so I will not be posting a sample. Presented here to share the original 10 inch jacket art.

From the back cover: It is no accident that Xavier Cugat is acclaimed the foremost exponent of Latin-American music today, for he comes from a family which prided itself on its patronage of the arts and which traces its ancestry back several generations in Spanish history. He was born in Barcelona, Spain, studied music at the finest conservatories in Europe and groomed for the concert stage.

It was during a concert in Rome that the Great Enrico Caruso heard the brilliant young violinist, Cugat, perform and persuaded him to accompany him on a tour of the United States. After remaining with Caruso for five years, Cugat realized that he could not become the greatest concert violinist in the world, and if he could not be the greatest, he would seek a new vocation. Thereupon, he decided to do cartooning, which had been a hobby of his since he was a young man. He achieved great success as a cartoonist for the Los Angeles Times newspaper, but finally became bored with the routine of having to meet deadlines and once more returned to his first love – music.

He formed an orchestra in California featuring Latin-American music. This type of music was partially unheard of at that time, but his unique treatment of it soon "educated" the public and was widely accepted. Credit, in considerable part, is due Xavier Cugat for the popularity of the Rhumba, Tango, Conga and Mambo today, for his music not only popularized but actually influence these dance rhythms.