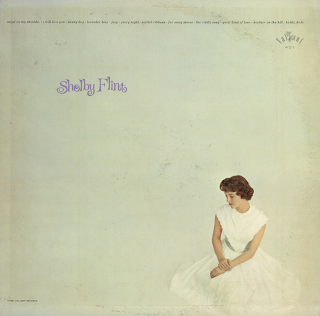 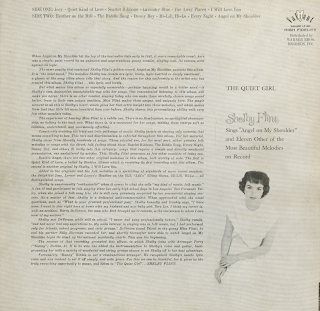 From the back cover: Shelby is unashamedly "enthusiastic" when it comes to what she calls "my kind of music, folk music." A fan of participant in folk singing since her high school days in Los Angeles' San Fernando Valley, when she joined a folk song trio, she is still very genuinely surprised by her commercial singing success. As a matter of fact, Shelby is a dedicated anti-commercialist. When approached with the usual questions, such as "What is your greatest professional goal," Shelby honestly and frankly says, "I have none. I want to star right here at home with my husband and new baby girl, Tara Lee. I think my career is, well, as accident. Barry De Vorzon, the man who first brought me to records, is the one person to whom I owe most of my success.

Shelby met De Vorzon while in school. "I never had sung professionally before," Shelby recalls, "and had never had any aspirations to. My main interest in singing was in folk music, but I had performed only for friends, school programs, and civic groups." De Vorzon found Talent in the young Miss Flint; he and his partner Billy Sherman recorded her, and shortly thereafter were able to watch Angel On My Shoulder begin to climb up the national popularity charts. This was the beginning.

The success of that recording prompted the album, in which Shelby joins with Arranger Perry ("Bunny") Botkin, Jr. It is he who has added the instrumentations to Shelby's voice and guitar, backgrounding her with a variety of woodwind and string groups chosen to set Shelby off to her best advantage.
Joey
Quiet Kind Of Love
Scarlet Ribbons
Lavender Blue
Far Away Places
I Will Love You
Heather On The Hill
The Riddle Song
Danny Boy
Hi-Lili, Hi-Lo
Every Night
Angel On My Shoulder
Posted by By Mark Betcher at 5:16 PM