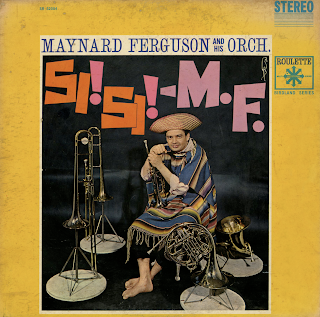 Available from online vendors so I will not be posting a sample. Presented here to share the original cover and Billboard review.

From Billboard - October 27, 1962: Maynard Ferguson is back once again with another LP tailored to the likes of big band fanciers. The album is nicely programmed between solid swing tracks and easy ballads, all done in an instrumental view. The band is ripping and roaring on the LP and the set features solid choruses by Maynard on trumpet, and good solo work from alto and tenor sax, trumpet and rhythm section. There's nothing Latin about the album but the title tune "Si Si," which emerges as one of the better tracks as do "Morgan's Organ" and "Early Hours."

What'll I Do
Early Hours
Morgan Point
Si! Si! - M. F.
Almost Like Being In Love
Mimi
Morgan's Organ
Born To Be Blue
Straight Out
Posted by By Mark Betcher at 4:25 PM