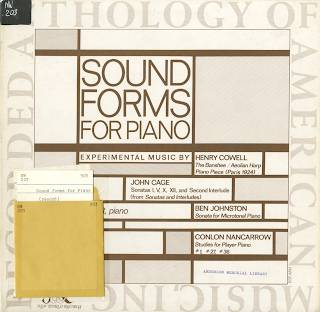 From the back cover: Robert Miller. During the past decade numerous works have been expressly written for Robert Miller by such leading American composers as Milton Babbitt, George Crumb, Charles Wuorinen, and Mario Davidovsky (the Pulitzer-Prize-winning Synchronisums No. 6). Miller's concert appearances have take him to the festivals of Tanglewood and Aspen, and to many other musical centers of North America. He has also made recordings for Deutsche Grammophon (in conjunction with Acoustic Research), Columbia, Turnabout-Vox, and CRI. Robert Miller combines his career as pianist with that of a practicing attorney on Wall Street.

The piano used for the Ben Johnston compositions was tuned microtonally using the Scalatron Tuner and Pitch Monitor. This equipment can establish any pitch progression both aurally and visually with extreme accuracy. We wish to extend our thanks to Richard J. Harasek and Motorola Scalatron, Inc. for their help and equipment for the microtonal tuning.

The Nancarrow "Studies" were recorded during an impromptu visit to the composer's home in Mexico City during March 1973. The recording equipment used was antiquated but well maintained. The studio in which Nancarrow's two Ampico upright player pianos are housed is approximately 20' x 50'. It is a resonant concrete-block structure lined with shelves containing musical books and manuscripts. Considerable care was taken in microphone placement in an effort to achieve a representative sound quality.
Posted by By Mark Betcher at 5:29 PM