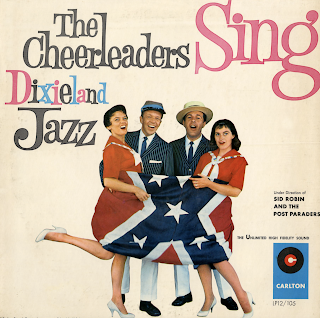 From the back cover: What makes a "good group"? The answer is obviously a personal one and each of us would define it in his own terms. But there are certain things that must be common to both your definition and mine: The Cheerleaders sing in tune. Now there's a gimmick in itself. Pay Pinney, Donna Manners, Tom Roddy, and Joe Pryor (as you listen from the top voice down) work as a unit – on one is flying off on an irresponsible tangent like a loose neutron which has just spotted a pretty female portion next door. There is cohesiveness in the way The Cheerleaders perform. A unity that can only verify their having been together since 1950, and digging it!

The shame of the music business is sometimes its lack of immediate recognition for deserving artists. There are many logical and illogical reasons for this which we needn't burden ourselves with here. Suffice to say that The Cheerleaders, although perhaps new to your record player, have a large and loyal following thanks to appearances in such diverse media as New York's Blue Angel", Palace Theater, and T.V.'s Dave Garroway, Tennessee Ernie, Betty Hutton and Frank Sinatra show. – Jack Lazare

From Billboard - November 17, 1958: The bright, bouncy sound achieved by The Cheerleaders in this platter is more in the mood of the old Pied Pipers and Modernaires groups than anything that came out of New Orleans. About half of the songs are "semi-Dixie" treatments of oldies like "Copenhagen," and the rest, like "Woodchoppers' Ball," are almost straight swing vocals. Nice stereo work, with singers "centered" before Side Robin's ork. rather than confined to one channel. Group's fans should like it.