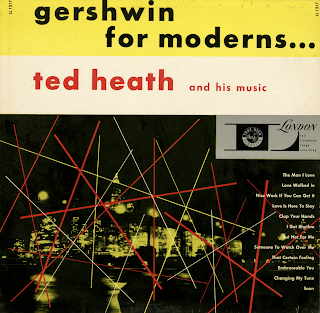 On Nice Work If You Can Get It, George Hunter (Baritone Sax) is replaced by Ken Kiddier

From Billboard - September 17, 1955: When Ted Heath played his most recent concert at the London Palladium August 21, London Records had its engineers on hand to tape the affair. This month the firm is releasing an earlier concert from the same source. No. 3 in the series. Heath also is represented this month with his "Gershwin For Moderns" LP.

The Man I Love Love Walked In
Nice Work If You Can Get It
Love Is Here To Stay
Clap Your Hands
I Got Rhythm
But Not For Me
Someone To Watch Over Me
That Certain Feeling
Embraceable You
Changing My Tune
Soon
Posted by By Mark Betcher at 5:02 PM