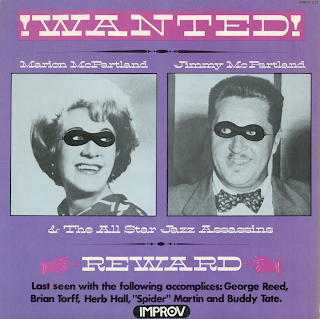 From the back cover: This live recording lets you share the magic that happened May14, 1977 at the Downtown Night Club in Buffalo, N.Y.

Bill Hassett has formed the Improv Record label in 1975. Several earlier releases had been done "live" at the club and met with excellent critical and market response.

That weekend was a jazz and good music festival in Buffalo. This album captures the essence of the joyful, easy, yet brilliantly disciplined playing of artists like the McPartlands, Buddy Tate, Herb Hall, and a newcomer who'll be heard a lot more – John "Spider" Martin. – Bill Hassett

All The Things You Are
Just A Closer Walk With Thee
Lonely Avenue
Royal Garden Blues
Dinah
Undecided
Posted by By Mark Betcher at 6:20 PM