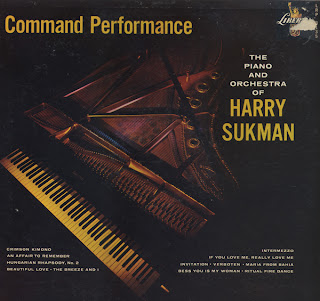 
The April 18, 1960 Billboard put the "Special Merit Spotlight" on this album: This is a fine new album featuring Harry Sukman, the concert pianist who composed the background score for the film based upon the life of Franz Liszt, called "Song Without End." Included here are manyh of Liszt's famous works, including "Liebestraum," "Hungarian Fanstast." and Concerto No. 1." They are played expressively by Sukman over full orchestral support. This album should have strong appeal when the film is released nationally.

Sukman was a prolific soundtrack composer. His first imdb.com credit is for a 1954 sci-fi movie, Riders To The Stars. Curiously, unless I missed it, Sukman doesn't have a wiki page. His daughter, Susan Sukman McCray, has written a book for children based on her father's "young life and love for the piano". Copies can be purchase directly from her website.
Posted by By Mark Betcher at 10:34 PM