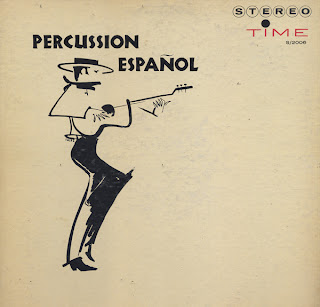 High quality recording on the TIME label with arrangements by Al Caiola.

The jacket is a double truck and I think this record must have been Time's answer to Enoch Light's Command Percussion Series.

By way of a sample, I picked Andalucia (better known as The Breeze And I) because the tune is so widely known as an "exotica" tune. It's also the best track off the record in my opinion.

Al Caiola also played guitar on this album as well as Mr. "X", John Pizzarelli and Don Arnone. Who Mr. "X" is... I have no idea. There are no online references for someone who would have been playing that many decades ago. Someone under contract to another company? Who knows?

Anyway, this isn't a "guitar" album, but more of an small band light 60s percussion/pop album. It's pleasant and consumable. The August 15, 1960 Billboard loved the album. " Al Caiola did the arrangements and they have much showmanship and brilliance."
Posted by By Mark Betcher at 4:24 AM