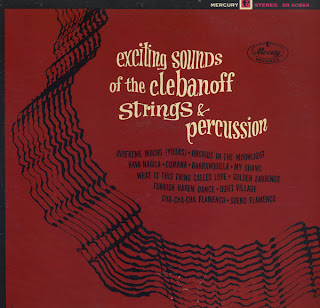 The March 6, 1961 Billboard: The arrangements are both tasteful and musical, and what is more they engage attention and hold it all the way through.

I can't find SR 60869 / MG 20869 anywhere online. I found this album with another cover design dated 1961/mono. This is the stereo release, which must have come a little later and, perhaps, saw little distribution.

I don't know what Billboard means by "tasteful and musical"... but the record is engaging, mixing a variety of styles from easy listening folk to groovy Enoch Light "light pop".
Posted by By Mark Betcher at 10:17 PM