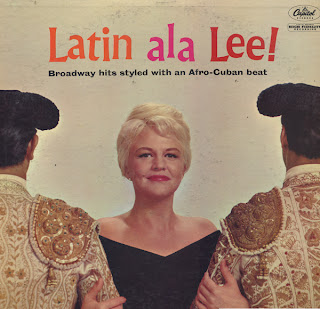 An unlikely combination of a pop singer, show tunes and latin music.

Lee is backed up by a smoking band, The Jack Marshall Orchestra. Through the first couple of songs, I was hip to the instrumentals but not Peggy. The third track, Till There Was You from The Music Man, was slow enough to allow the smoky quality of Lee's voice to take over. The same goes for Hey There, from The Pajama Game a track that also has a quirky 60s feel to it. I'm being picky, but a few tunes didn't translate well to "Latin". But the majority of tracks are wonderful, including The Party's Over from Bells Are Ringing and Wish You Were Here from Wish You Were Here.