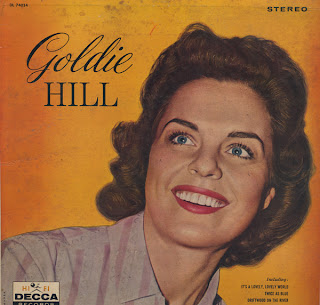 August 1, 1960 Billboard gave this album "very strong sales potential". The Golden Hillbillie has a powerful package of weepers, rhythm songs and other country material. Album is well-recorded and should do extremely well in its field.

I normally don't buy vintage country, but I liked the cover photo on this one.

Hill was one of the first women in country music to reach the top of the country music charts. She had success and turned it down to when she married country singer Carl Smith and retired to living on their horse farm.

This is Hill's first of four albums on Decca released in the early 60s before she retired (or while she was making the decision to retire). Even the jacket notes hint that she is "retired". When you play this album you will be glad Goldie is happy in her homemaker's humming, but you will hope she will return to the studio for more recording soon.

See her wiki page for Hill's complete bio.
Posted by By Mark Betcher at 3:53 PM