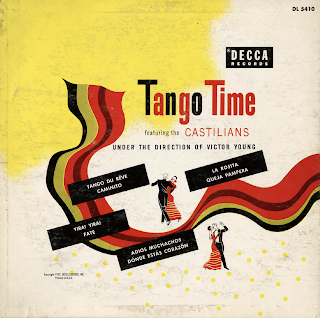 La Rosita
Tango Time
Featuring The Castilians
Under the Direction of Victor Young
Instrumental Tangos
Decca Records DL 5410 (10 inch 33 RPM)
1952
From the back cover: Victor Young was born in 1900 in Chicago. He inherited has musical talent from his father, an accomplished musician and singer. At four he was plucking the strings of a violin given to him by his grandfather, and at six he was playing recognizable melodies on this same instrument.
When Victor Young was ten he was sent to live with his grandfather in Warsaw. Here he aroused the interest of the director of the Imperial Conservatory and worked hard to justify this dignified attention. He later graduated from the Conservatory and received a Guarnerius violin from a Polish banker.
After the signing of the Armistice of World War I he returned to America and married his Polish sweetheart in California. National interest followed, and soon Young was back in his home town in Chicago, where he conducted large orchestras in plush movie palaces. He was able now to compose and arrange his own music. Striking a compromise with the jazz mood of the day, he became one of the first true exponents of that great type of American music.
Riding the rising tide of his fortunes he was mad musical director for Balaban and Katz. In this era of the twenties the whole nation was singing his "Sweet Sue" and now, in the fifties, they're still singing it.
A roll call of his popular tunes would fill many pages, but a few of his top hits of the roaring twenties include "A Ghost Of A Chance," "Street Of Dreams." "Can't We Talk It Over," "Love Me Tonight," Lawd You Made The Night Too Long," "Let Me Be Born Again," "Beautiful Love," "Sweet Madness," "A Hundred Years From Today," "Give Me A Heart To Sing To," "Old Man Of The Mountain," "Je Vous Adore." Today's youngsters cannot only sing his "Sweet Sue' but a flock of other Victor Young Tunes, ranging from other hits still popular to the recent song hit, "My Foolish Heart."
Victor Young's sensitive scores soon made him the objective of Hollywood music tales scouts and he came to Paramount Studios in 1935. Examples of his talent are shown in many pictures, the complete list numbering around two hundred. Some of them are "For Whom The Bell Tolls," "Love Letters," "Golden Earrings," "September Affair," "Ridin' High," "Samson And Delilah," "Something To Liv For," "The Greatest Show On Earth," all for Paramount and, in the free lance field, "My Foolish Heart," "The Quiet Man," "Sands Of Iwo Time," "The Korean Story," etc.
Victor Young has been etching for Decca Records since the waxery's inception in 1934. He has recorded for them his most important motion picture scores in album form, "For Whom The Bell Tolls," "Love Letters," "Golden Earrings," "Samson And Delilah,""The Quiet Man," and others.
A few of the Decca recording artist he has worked with are Bing Crosby, Dick Haymes, The Andrew Sisters, Tommy Dorsey, The dramatic albums for which he has scored the music include such artists as Ronald Colman, Walter Huston, Loretta Young, Herbert Marshall, Ingrid Bergman, Charles Laughton, Ginger Rogers, Bing Crosby, Agnes Moorehead, Sidney Greenstreet. Victor Young has also exhibited his musical talents on top-notch radio shows. He worked four years on the John Charles Thomas (Westinghouse) Radio Show and more recently on the Carnation Contented Hour for a two year period.
In the realm of serious music, several large orchestral composition of his are "Pearls On Velvet," "Arizona Sketches," "Leaves Of Grass," "Stella By Starlight," "Manhattan Concerto," all of which have been performed during past seasons by the San Francisco Symphony and the Los Angeles Philharmonic orchestras.
Tango Du Reve
Caminito
La Rosita
Queja Pampera
Yira! Yira!
Fate (Tango Valentine)
Adios Muchachos
Donde Estas Corazon
Posted by By Mark Betcher at 2:49 PM