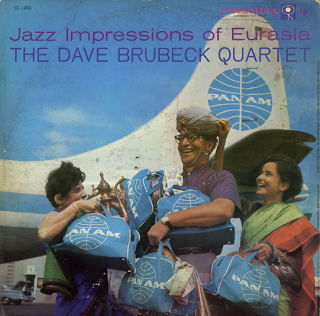 From the back cover: In early February 1958, the Quartet and I boarded a Pan America Clipper for London. Our tour, which began in England, took us through the countries of Northern Europe, behind the Iron Curtain into Poland, through the Middle East (Turkey, Iran and Iraq) and on into India, Pakistan, Afghanistan and Ceylon. When we returned to New York in the middle of May, we had traveled thousands of miles, had performed over 80 concerts in 14 different countries, and had collected a traveler's treasure of curios (see cover) and impressions (hear record) of Europe and Asia.

As in "Jazz Impression of the U.S.A.," these sketches of Eurasia have been developed from random musical phrases I jotted down in my notebook as we chugged across the fields of Europe, or skimmed across the deserts of Asia, or walked in the winding alleyways of an ancient bazaar. I did not approach the writing of this album with the exactness of a musicologist. Instead, as the title indicates, I tried to create an impression of a particular locale by using some of the elements of their folk music within the jazz idiom.

From Billboard - November 24, 1958: The set is composed of musical settings based on themes suggested or acquired by the pianist and his crew on their European and Middle East trek earlier this year. It's an excellent six track set which allows Desmond his usual share of honors. Joe Benjamin is featured on bass, and Joe Morello hold down drums. It's another fine offering by the group, and another likely big seller. Good cover photo of Brubeck trying on a turban.