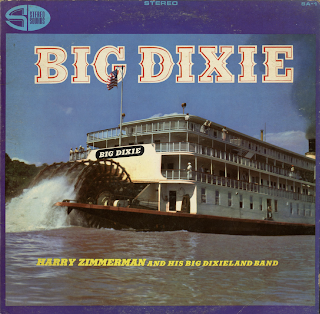 From the back cover: The musicians in this album who obviously have so much fun playing together are Mickey Mangano, Conrad Gozzo and Cappy Lewis on trumpet; Joe Howard and Herbie Harper on trombone; Willie Schwartz, Eddie Miller, Heine Beau and Dale Issenhuth on saxophone; Sam Cheifetz, bass; Al Hendrickson, guitar; and Irv Cottler and Lou Singer provide the drum work and swing on percussions.From Billboard - October 27, 1958 (HiFi Record R608 review): Dixieland loses much of its warmth and tightly-knit tenture when its given the big band blowup. Its characteristic free-swinging style sounds fenced in by arrangements. But even Dixie must yield to progress and hi-fi's demands for the big, full sound, aside from these inherent shortcomings, the musicianship here is tops, and the big sound they deliver is excellently recorded to show off any hi-fi or stereo rig to its fullest advantage. And that'll sell 'em.