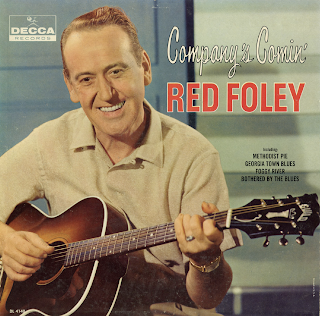 From the back cover: Red was well on his way to becoming the best known "French harp blower" of Madison County, Ky., when some Chicago radio man had the idea of hiring him for a big-city station. So ended a promising career of harmonica playing at box socials and began, at age 20, just about the greatest number of years of top popularity any entertainer has ever known. (This album's lead-off tune, Methodist Pie, is one he's done throughout his 31 years of professional singing on radio, personal appearances and, more recently, TV.

Not long ago, Red and older brother Cotton (and enough shirt-tail kinfolks to have made Gen. Robert E. Lee a respectable sized battalion) helped Mama and Papa Foley celebrate their sixtieth wedding anniversary in Berea. Around the house Red found some old harmonicas, left over from the days when the family operated their little general store. When he took one of them out to the back porch to recapture some of the fun the instrument had once brought him, Red hastily discovered his playing was as rusty as the harmonica itself. "Guess I wasn't a born French harp player after all," he muttered, and returned to join the others inside.

But a born singer of country music he is. A singer of the songs that are warm and homey and as typical of the American way of life as – well, to use a well-worn phrase, apple pie. Red's singing, however, has been the "a la mode," the ice cream on top of the apple pie. For Foley's is the "something special" talent of country music.

Methodist Pie
We Live In Two Different Worlds
Georgia Town Blues
Trouble In Mind
Brother Bill
Foggy River
Company's Comin'
Bothered By The Blues
Why Don't You Haul Off And Love Me
You're Nobody Till Somebody Loves You
Tennessee Border
The End Of The World
Posted by By Mark Betcher at 4:23 PM