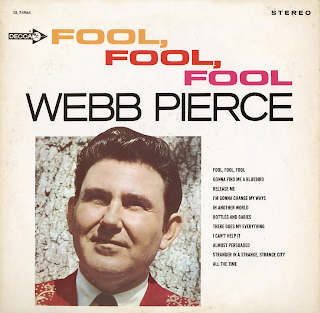 From the back cover: The Webb Pierce story might easily be termed an Horatio Alger tale. Born on a farm in West Monroe, La., he was one of five-children - he has three brothers and a sister. He first picked a guitar at the age of twelve, and in less time than it took to bring in a season's crop, Webb mastered the instrument. It wasn't long thereafter that his relatives and neighbors heard a good deal of his singing and playing and soon came to realize his inborn talents. Young Webb, they felt, was surely a "natural."

At sixteen he was proficient enough to land his first gob as a professional entertainer, a 15-minute radio show over his hometown station. Webb still worked the farm with his dad, but the show – which soon became the most popular one in the area – and the world of entertainment were now his main interests.

Next came the three years with the army, followed by the job with Sears Roebuck while he was waiting to resume his singing career. That first "big break" came when he landed a week-to-week spot with the famed "Louisiana Hayride." At the start, he was used sparingly, but within a few short months the program received a veritable flood of fan mail begins to hear more from the newcomer, and the "Hayride" sponsors obliged by elevating Webb to a starring role. And the rest, as they say, is country music history, as success followed success. Today Webb Pierce is one of the most honored country music entertainers of our time.

In 1951, Webb signed the first of many long-term contracts with Decca Records, and his string of consistent hit recordings is well commented upon wherever country music fans congregate. Today, Webb Pierce is one of the nation's foremost country stars. He has sold millions of recordings for Decca, has popularized hundreds of songs (many of which he has written himself), and his fan mail rivals that of any Hollywood star. All of this, however, comes as no surprise to Webb's kin and neighbors back home in West Monroe, La., for to them, as we mentioned above, he was always a "natural."

Fool, Fool, Fool
Gonna Find Me A Bluebird
Release Me
I'm Gonna Chance My Ways
In Another World
Bottles And Babies
There Goes My Everything
I Can't Help It (If I'm Still In Love With You)
Almost Persuaded
Stranger In A Strange, Strange City
All The Time