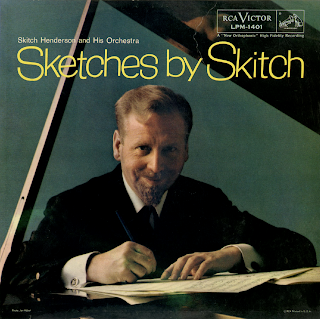 From the back cover: Skitch has been moving toward this productive utilization of his mixed musical background for a long time. In the beginning he was a "longhair." He studied piano with Roger Aubert in Paris. His instructors in conducting were Albert Coates and Fritz Reiner. He learned harmony from the twelve-toned Arnold Schonberg. Then, with this unremitting classical background, he plunged into the world of dance bands and studio work.

His association with popular music, Skitch now says, was simply the result of a succession of events, the most compelling of which were his appearances as piano soloist on both Bing Crosby's and Frank Sinatra's radio shows, appearances which led him to form his own dance band under the urging of Crosby and Sinatra. After touring with this band with great success for a couple of years in the late Forties, he joined the National Broadcasting Company and, as a consequence of his work on the TV program "Tonight," he is now known not only as a conductor and pianist but also as a comedian and the possessor of a set of blonde, bristling mustachios of piratical proportions.

Meanwhile he was determinedly getting back to his first love, classical music, by making guest appearances as a conductor with such orchestras as the New York Philharmonic and the Minneapolis Symphony. His split musical personality is still going merrily on its separate ways – recently he was guest conductor with the Houston Symphony and immediately afterwards hopped a plane for Cleveland where he played at a dance the next night for the Heart Fund – but these Sketches By Skitch are a step, he hopes, toward healing the rift and solidifying his musical soul.

From Billboard - June 10, 1957: Bewitched Skitch Henderson glows out from this cover with a pixieish and salable smile and the contents are no letdown. The label's June S-R-O bargain package contains some of the classic standards in a listenable new dress of experimental woodwind scoring. Sound is tops. Interesting added color comes from a trio of French horns, and spot of the maestro's piano. One of the sharp mood sets of the day. Can do very well.

Soon
All Through The Night
All The Things You Are
Farewell Armanda
Impossible
Simplice
In A Sentimental Mood
As Long As I Live
East Of The Sun
Dancing On The Ceiling
Mood Indigo
If I Love Again
Posted by By Mark Betcher at 5:19 PM