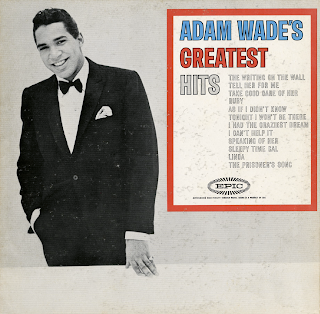 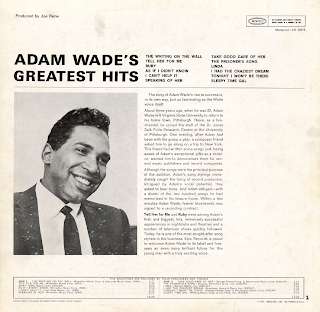 From the back cover: The story of Adam Wade's rise to success is, in its own way, just as fascinating as the Wade voice itself.

About three years ago, when he was 22, Adam Wade left Virginia State University to return to his home town, Pittsburgh. There, as a biochemist, he joined the staff of the Dr. Jonas Salk Polio Research Center at the University of Pittsburgh. One evening, after Adam had been with a group a year, a composer friend asked him to go along on a trip to New York. This friend had written some songs and, being aware of Adam's exceptional gifts as a vocalist, wanted him to demonstrate them for several music publishers and record companies.

Although the songs were the principal purpose of the audition, Adam's song stylings immediately caught the fancy of record producers. Intrigued by Adam's vocal potential, they asked to hear more. And Adam obliged – with a dozen of the two hundred songs he had memorized in his leisure hours. Within a few minutes Adam Wade, former biochemist, was signed to a recording contract.

Tell Her For Me and Ruby were among Adam's first, and biggest, hits. Immensely successful appearances in nightclubs and theaters and a number of television shows quickly followed. Today, he is one of the most sought-after song stylists in the business. Epic Records is proud to welcome Adam Wade to its label and foresees as even more brilliant future for this young man with a truly exciting voice.

From Billboard - July 7, 1962: Here are Adam Wade's fine hits from the Coed Label, which were transferred to Epic along with Wade's singing by the firm. And fine listening it makes. Fans will readily remember such titles as "Ruby," "Tell Her For Me," "The Writing On The Wall," etc. A dozen titles all told and the set seems a natural for brisk action.

The Writing On The Wall
Tell Her For Me
Ruby
As If I Didn't Know
I Can't Help It
Speaking Of Her
Take Good Care Of Her
The Prisoner's Song
Linda
I Had The Craziest Dream
Tonight I Won't Be There
Sleepy Time Gall
Posted by By Mark Betcher at 8:06 PM