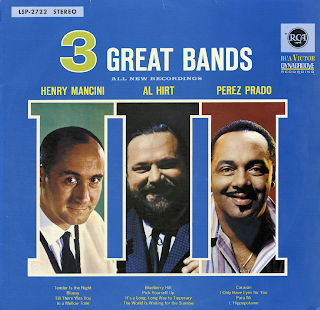 From Billboard - August 17, 1963: Here's a triple-header that should have great appeal for dance band music buffs. It displays the arranging and conducting talent of these dissimilar bands, Henry Mancini, Al Hirt and Perez Prado. they come through with four tracks each of top-styled arrangements of standard tunes, and the set offers a wide variety of music for dancing or just listening.

Henry Mancini and His Orchestra
Tender In The Night
Bluesy

Perez Prado and His Orchestra
Para Mi
L'hippopotame
Posted by By Mark Betcher at 6:00 PM