Mad About The Boy - Andre Previn 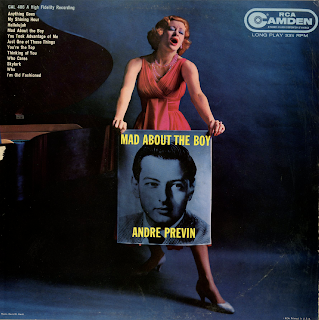 From the back cover: For a musician who will not reach his thirtieth birthday until 1959, Andre Previn has already mastered a fantastic amount of musical territory. First trained in the classics, than a successful composer and conductor in the twilight zone of film music, later a skilled exponent of jazz-edged performances of show-tunes and most recently acclaimed as a full-fledged modern jazz pianist, Previn has moved on from the conquest of one area to the next despite the fact that he might have had a very successful and, in some ways, rewarding career in his Hollywood studio work alone.

But it does not appear to be in the nature of this young Berlin-born pianist to rest content with any one aspect of music. He seems to treasure a challenge and if a challenge does not readily present itself, he will go out and look for one. Son of a Berlin piano teacher – where he was born on April 6, 1929 – and nephew of Charles Previn, well known as a conductor of Hollywood musical scores, he came to this country in 1938 and settled in Beverly Hills.

The classical music atmosphere that he knew at home was tempered by the American popular music that surrounded him at Beverly Hills High School. This taste for the music of his new homeland was amplified when he discovered the work of Teddy Wilson and Art Tatum and began to acquire some of the feeling of their playing. He moved straight out of high school to the movie studios but he continued to develop his talents as a polished piano soloist who could draw on both a legitimate background and the subtle refinements of American Jazz.

Who
I'm Old-Fashioned
Posted by By Mark Betcher at 5:54 PM