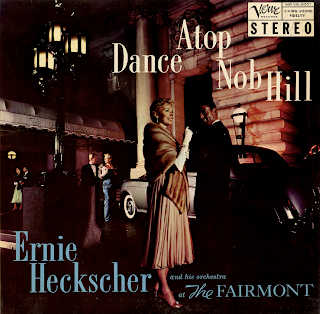 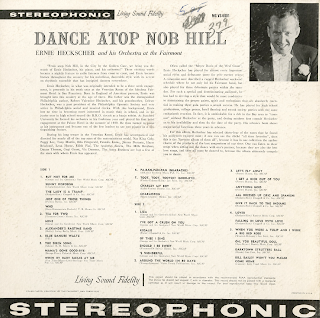 Pa-Ran-Pan-Pan (Guarache)
Dance Atop Nob Hill
Ernie Heckscher and His Orchestra at The Fairmont
Cover Photo Courtesy of The Fairmont, San Francisco
Verve MG VS-6001
1957

From the back cover: Ernie Hechscher, is what was originally intended to be a three week engagement, is presently in his tenth year at the Venetian Room of the fabulous Fairmont Hotel in San Francisco. Born in England of American parents, Ernie was brought into this country at the age of three. His father was the distinguished Philadelphia author, Robert Valentine Heckscher, and his grandmother, Celeste Heckscher, was a past president of the Philadelphia Operatic Society and very active in Philadelphia social and musical circles. With this background, Ernie lost no time in becoming more interested in music than in school, and in his junior year in high school toured the R.K.O. circuit as a banjo soloist. At Stanford University he formed his orchestra in his freshman year and played his first hotel engagement at the Palace Hotel in the summer of 1939. He then turned to piano as his instrument and became one of the few leaders to use two pianos as a distinguishing feature.

During his long tenure in the Venetian Room, Ernie has accompanied and directed for nearly all of the top stars of the entertainment world. Nat Cole, Peggy Lee, Tony Martin, Ella Fitzgerald, Frankie Laine, Jimmy Durante, Harry Belafonte, Lena Horne, Edith Piaf, The Andrew Sisters, The Mills Brothers, Danny Thomas, Gogi Grant, Vic Damone, The Ames Brothers are but a few of the stars with whom Ernie has appeared.

Often call the "Meyer Davis of the West Coast", Ernie Hecksher has played for almost every important social event and debutante party from over twenty years. A columnist once described a rugged Heckscher week-end schedule where he not only led his Fairmont band, buy also played for three debutante parties within the same day. For such a special and discriminating audience, he has had to develop a style that would be most conductive to maintaining the proper gaiety, spirit and enthusiasm that are absolutely essential in making these gala parties a smash success. He played for high school graduations, college proms, hotel dancing and swank society parties with the same enthusiastic reaction. In fact, it is unthinkable for a deb in the Bay area to "come out" without Heckscher at the party, and doting mothers first consult Heckscher as to his availability and then fix the date of the party. His advance book shows major social functions three years in advance.

Tea For Two
Mine

Lover
Falling In Love With Love

When You Wore A Tulip And I Wore A Big Red Rose
Oh, You Beautiful Doll
Darktown Strutters Ball
Bill Bailey Won't You Please Come Home
Posted by By Mark Betcher at 7:21 PM