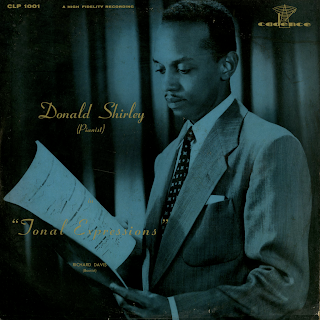 From the back cover: In considering his (Shirley) background, you should know that his first teacher was his mother, that he was born in Kingston, Jamaica on January 23, 1927, that at the age of nine he was extended an invitation to study theory with Mittolovski at the Leningrad Conservatory of Music, that he later studied with the famous organist Conrad Bernier, and that he studied advanced composition with both Bernier and Dr. Thaddeus Jones at the Catholic University of America in Washington, D. C.

Shirley made his concert debut with the Boston "Pops" Symphony Orchestra in Boston June 25, 1945, with Dean Dixon as guest conductor. In 1949 he received an invitation from the Haitian government to play at the Exposition Internationale du Bi-Centenaire De Port-au-Prince followed by a request from Archbishop Le Goise and President Estime for a repeat performance the following week. Upon Arthur Fiedler's recent trip to Chicago, Shirley was again extended an invitation to appear with the orchestra in June 1954.

With such a background, it is evident that Shirley is a highly respected legitimate musician possessing great technical skill and an innate musical ability. He displays also great tenderness and emotional depth which render his performances inspiring.

As a composer, Don Shirley has to his credit four organ symphonies, a group of small pieces for piano, two string quartets and a piano concerto. He has written a full variation concerto against Ravel's "Bolero" much the same as Rachmaninoff did with the "Paganini Variations". It is his ambition to record this with full symphony orchestra. A nation-wide concert tour is his next venture and you will, we are sure, want to hear this fine artist in person. – Al "Jazzbo" Collins

Promotional quotes from the back cover include:

The coordination and rapprochement between the classical and modern literature went beyond mere metrical accuracy. – George Shearing

The most glorious sense of shading, phrasing and balance I've ever heard. – Sarah Vaughan

I Cover The Waterfront
No Two People
Secret Love
The Man I Love
Love Is Here To Stay
Dancing On The Ceiling
They Can't Take That Away From Me
Answer Me My Love
Medley for "New Faces
My Funny Valentine
Posted by By Mark Betcher at 5:09 PM