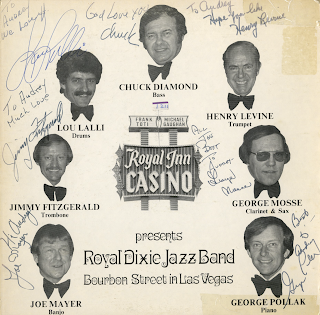 From the back cover: Dixieland jazz, that magical music – spawned in the street bands of New Orleans in the late 1800's, weaned in the brawling south side of Chicago during the cold winter of 1916 an destined to mature as the first native American music style, is on the move again.

Now, it's Bourbon Street, Las Vegas, with the banners of the hot jump being borne by an aggregation of the finest Dixieland talent available today.

The "Royal Dixie Jazz Band" is the culmination of the lifetime dream of player-leader Charles "Chuck" Diamond, violinist, trombonist and graduate of the Cleveland Conservatory of Music, who turned down a job with the St. Louis Symphony to organize a Dixieland jazz band. That was several years and many bands ago.

In 1973 Diamond's break came with an extended gig at Michael Gaughan's Royal Inn Casino in Las Vegas. Diamond's band began to take shape with a solid rhythm section. For the past six months, in its final form, the band has consistently packed the lounge at the Royal Inn with Dixieland fans.

This album's 12 recordings are daily fare at the Royal Inn and a sampling of the versatility of these musicians.

Henry "Hot Lips" Levine, whose driving trumpet carries the melody line, at age 15 replaced Nick LaRocca with the world famous "Original Dixieland Jazz Band." He originated the highly rated NBC radio show, "The Chamber Music Society of Lower Basin Street," and is considered the finest Dixieland trumpet in the country, if not the world.

George Mosse, clarinetist, plays flawless counterpoint on the treble notes. His "take off" on breaks and solos is always in traditional Dixieland style. Mosse is a music major graduate of Southern Methodist University. It was during his college years that he first became interested in Dixieland music. His love of the traditions of Dixieland fits him to Levine's trumpet like a hand in a glove, and some of the best solo work in this album is by Mosse.

James Fitzgerald, trombonist, cut his musical teeth on Dixieland music in the basement of his Mason City, Iowa home. Fitzgerald's father, a Dixieland player, knew the music from its inception and began teaching his son trombone at age 7 when the youngster had to use his foot to play the bottom of the slide. His first Dixieland band was organized at age 12 and two years later the group was playing dates. Fitzgerald's ensemble work is outstanding and he plays in the traditional "gut-bucket" style of the original Dixieland groups.

Joe Mayer, banjoist, orphaned at nine, began playing banjo on street corners for pennies. He grew up with Dixieland music in speakeasies and barrooms and for many years led the top ranked vaudeville and television act, "The Novelites." Mayer's banjo and vocal work is the frosting on the cake of this band.

George "Fingers" Pollak, pianist, plays with the free-swinging style of the best ragtime piano players and his work on "The Old Piano Roll Blues" is a bare taste of his keyboard abilities. Pollak, one of the most in demand pianists in Las Vegas, has backed some of the top entertainers that have appeared on "The Strip." His preference, however, is at the "88" with the Royal Dixie Jazz Band."

Lou Lalli, drummer, is the heartbeat of the band. Lalli was one of Diamond's first choices in selecting his rhythm section. Dixieland drumming, more than any other musical style, requires playing as well as maintaining a strong beat. In each of these areas Lalli proves his mastery of the instrument, maintaining a strong backbone beat for each song, than adding the extra Dixieland flavor which can only be described as melody. – Boyd Hagen