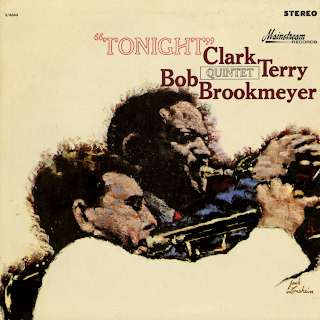 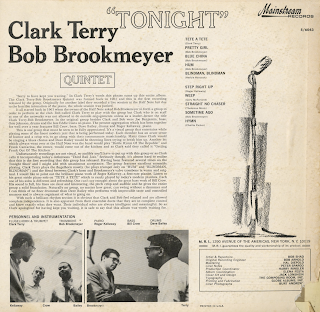 From the back cover: "Sorry to keep you waiting." In Clark Terry's words this phrase sums up this entire album. The Clark Terry - Bob Brookmeyer Quintet was formed back in 1961 and this is the first recording released by the group. Originally for another label they recorded a live session at the Half Note but due to the horrible intonation of the piano, the whole session was junked.

It all started back in 1961 when the owner of the Half Note asked Bob Brookmeyer to form a group in order to perform at the club. Bob called Clark Terry to play with the group but Clark who is on staff at one of the networks was not allowed to do outside engagements unless as a leader-hence the title Clark Terry - Bob Brookmeyer. In the original group besides Clark and Bob were Joe Benjamin, bass; Osie Johnson, drums and the late Eddie Costa on piano. The present aggregation which has been together for well over a year features Bill Crow, bass; Dave Bailey, drums and Roger Kellaway, piano.

This is one group that must be seen to be fully appreciated. It's a visual group that entertains while playing some of the finest modern jazz that is being performed today. Each member has an acute sense of humor and a crisp wit, to go along with their consummate musicianship. Many times Clark would be singing a blues chorus and Dave Bailey would be throwing lines trying to break him up. Another bit which always went over at the Half Note was the band would play "Battle Hymn Of The Republic" and Frank Cantarina, the owner, would come out of the kitchen and as Clark said they called it "Getting Frank Out Of The Kitchen."