Is It True What They Say About Dixie? - The Dixie Double-Cats 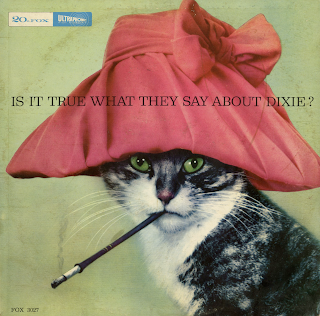 Blues In The Night
Is It True What They Say About Dixie?
The Dixie Double-Cats
Cover: Walter Chandoha
Courtesy, Ohrbach's N. Y.
20th Fox
Fox 3027
1959

From the back cover: These Double-Cats are unusual in several ways. For one thing, the group is actually a double Dixieland team – instead of the usual front line of trumpet, trombone and clarinet, there are two or each. That's why they're The Dixie Double-Cats. The additional instrumentation gives them opportunity for all kinds of solo and ensemble variations that would not be possible for a standard Dixieland group.

They "double" in other ways, too. The clarinetists also play saxophone (tenor, soprano and baritone) and even bass clarinet, adding even more variety to the tonal palette. On top of this, it's the sort of cooperative group in which each man has an opportunity to act as leader, to present his ideas to the rest of the group and to have a piece played the way he thinks it should be done. It's such a happy, friendly, democratic system that they might have called themselves The Dixie Demo-Cats.

A set-up such as this can produce new ideas and fresh approaches but it doesn't mean that these ideas will have a true association with the Dixieland tradition. But that doesn't happen here because the men who make up The Dixie Double-Cats know that tradition from A to Z, from Canal Street to The Village. Some of them have even helped to create that tradition.

Take one of the two saxophonists, for instance – Deane Kincaide (the other saxophonist is Phil Bodner). To those of you whose memories go back to the great Bob Crosby band of the 1930s, Kincaide's will be a meaningful name. He was one of the charter members of that band and, along with Matty Matlock and Bob Haggart, he wrote the arrangements which set the tremendously successful pattern of big band Dixie which carried the Crosby band to fame. Before that he had played in Ben Pollack's band (which had also nurtured Benny Goodman, Glenn Miller and Jack Teagarden), wrote the arrangement of Bugle Call Rag which became Benny Goodman's first big hit, and later played for Woody Herman when he was on a Dixie kick for Tommy Dorsey and Ray McKinley.

More than any other arranger, Kincaide has been able to extend the essential Dixieland tenets by using devices developed during the Swing Era. To do this he needs men who understand both styles – and that is precisely what he has in The Dixie Double-Cats. Trumpeters Bernie Privin and Mel Davis have had long careers with the major single great band – he has been with Bunny Berigan, Tommy Dorsey, Benny Goodman, Artie Shaw, Charlie Barnet and Glenn Miller). The trombonists, Harry Divito and Rod Levitt, come from similar backgrounds. Pianist Mary Napoleon's credentials, aside from his relationship to Phil Napoleon (nephew), includes spells with Louis Armstrong, Gene Krupa and Charlie Ventura and frequent appearances at the Metorpole in New York. The bass and drum team of Jack Lesburg and Cliff Leeman have played everything from Dixie to Beethoven and back under batons as different as those of Leonard Bernstein and Eddie Condon.

When men with all this experience, with a known urge to breathe fresh air into the Dixieland atmosphere, come together in as unique a unit as The Dixie Double-Cats, the program they pick is bound to be provocative. And the way they play that program should be even more exciting.

Columbia, The Gem Of The Ocean
High Society; When The Saints Go Marching In
Georgia On My Mind
It It True What They Say About Dixie?
Shake It And Break It
Blues In The Night
Dreamer's Rag
Bugle Call Rag
Wabash Blues
Original Dixieland One-Step
I Heard
The Caissons Go Rolling Along; Dixie
Posted by By Mark Betcher at 3:33 PM