Woody Herman Sextet At The Roundtable 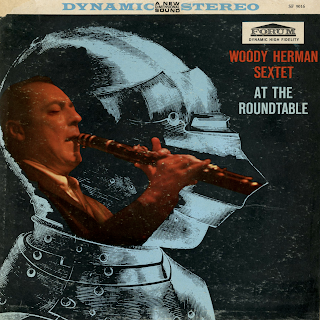 From the back cover: Herman was playing great jazz horn with small combos when the big, arranged bands were all the thing. And he was leading big, new, expensive bands in the days when anybody could tell you the big band business was dead. Now he comes back on this record, "Woody Herman Sextet At The Roundtable," with a small group. And, as might be expected, he has reached out for some of the youngest and most forward thinking musicians to be grabbed. With Herman alternating between clarinet and alto, this group features the brilliant Charlie Byrd on guitar, using a style which somehow makes the more familiar heavily amplified guitar sound like something out of a Hawaiian strolling group. Also present is Eddy Costa, well known to younger cats than myself as the most explorative of pianists, but who on this record will knock you out on vibes.

And there is Nat Adderley, finally doing with a trumpet so many of the things he was previously indicated he wants to do. And for bass there is Bill Betts and on drums we have Jimmy Campbell. With considerable shame I must admit this is my first meeting with theses lads. But just listen to the background rhythm they give to the Sidney Bechet masterpiece, "Petite Fleur" and you'll see what I mean. – Robert Sylvester

From Billboard - May 4, 1959 (Roulette R25067 review): The Herman name should prove a draw to this item. Herman gives ample solo room to his sidemen in the package. There's some fine work by Nat Adderly, Eddie Costa and Charlie Byrd and support by Jimmy Campbell on drums and Bill Betts on bass is also noteworthy. The tunes are interesting. Herman is heard on both alto sax and clarinet to good advantage. With exposure, this can sell. "Just a Child" is an excellent track.

Black Nightgown
Pea Soup
Just A Child
Petite Fleur
Lullaby Of Birdland
Inside Out
The Swingin' Shepherd Blues
The Deacon And The Elder
Princess "M"
Moten Swing
Early Autumn
The Late Late Show
Posted by By Mark Betcher at 5:55 PM