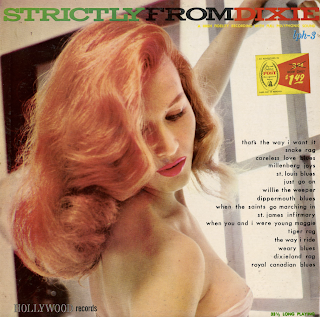 From The Hollywood Album Discography: Strictly from Dixie [aka Dixieland Jazz] - Hot Rod Six Plus Two/Dixieland Five Plus Two [1956] Album cover gives the group as the Dixieland Five Plus Two, while the label credits the Hot Rod Six Plus Two. Either way, the real band was The Cy Laurie Jazz Band. Because the label also has the working title, "Dixieland Jazz," even though the actual title of this album is "Strictly from Dixie," this album is sometimes listed as "Dixieland Jazz". (This album may have originally been issued with a different cover showing the Firehouse Five Plus Two.) It was also issued as Westchester LPH-3. These songs were originally issued in 1955 on four four-song EPs by the Hot Rod Six Plus Two on the Gateway label (Gateway 9008-9011).

That's The Way I Want It
Snake Rag
Careless Love Blues
Millenberg Joys
St. Louis Blues
Just Go On
Willie The Weeper
Dippermouth Blues
When The Saints Go Marching In
St. James Infirmary
When You And I Were Young Maggie
Tiger Rag
The Way I Ride
Weary Blues
Dixieland Rag
Royal Canadian Blues
Posted by By Mark Betcher at 1:21 PM