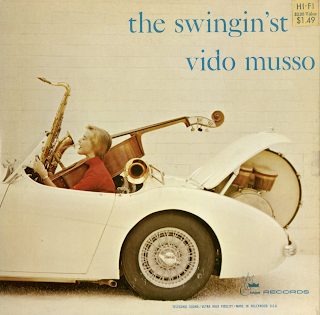 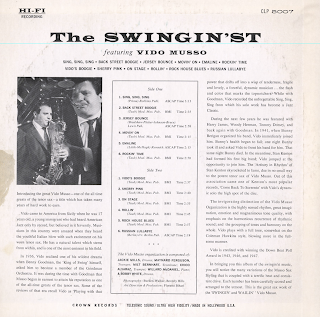 The Vido Musso organization is composed of:

From Billboard - September 22, 1956: Musso, one-time tenor sax star with several big bands in the Swing Era, plays here like an inferior rhythm and blues honker. Customers attracted by nostalgia will be disappointed by the coarse, uninventive blowing. They will be intrigued by some amazing double-talk in the liner notes, however.

From the back cover: Introducing the great Vido Musso – one of the all time greats of the tenor sax – a title which has taken many years of hard work to earn.

Vido came to America from Sicily when he was 17 years old, a young immigrant who had heard American Jazz only by record, but believed in it fervently. Musicians in this country were amazed when they heard the youthful Italian blow with such excitement on his worn tenor sax. He has a natural talent with stems from within, and is one of the most eminent in his field.

In 1936, Vido realized one of his wildest dreams when Benny Goodman, the 'King Of Swing' himself, asked him to become a member of the Goodman Orchestra. It was during the time with Goodman that Musso began in earnest to attain his reputation as one of the all-time greats of the tenor sax. Some of the reviews of that era recall Vido as 'Playing with that power that drifts off into a wisp of tenderness, fragile and lovely, a forceful, dynamic musician... the flash and color that marks the topnotcher. While with Goodman, Vido recorded the unforgettable Sing, Sing, Sing from which his solo work has become a Jazz Classic.

During the next few years he was featured with Harry James, Woody Herman, Tommy Dorsey, and back again with Goodman. In 1941, when Bunny Berigan organized his band, Vido immediately joined him. Bunny's health began to fail; one night Bunny took ill and asked Vido to front his band for him. That same night Bunny died. In the meantime, Stan Kenton had formed his first band; Vido jumped at the opportunity to join him. The 'Artistry In Rhythm' of Stan Kenton skyrocketed to fame, due in no small way to the potent tenor sax of Vido Musso. Out of this association came one of Kenton's most popular records, 'Come Back To Sorrento' with Vida's dynamic solo the high spot of the disc.