My Kind Of Girl - Matt Monro 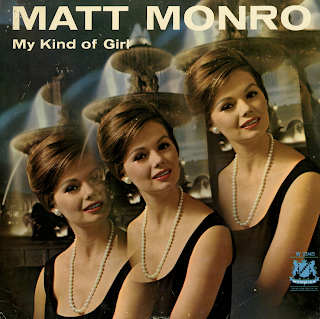 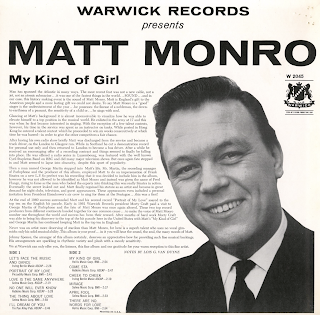 From Billboard - October 16, 1961: Matt Monroe a highly personable young Britisher, opened his initial American club engagement at the Roundtable here Monday (2), to the accompaniment of an augmented 12-piece band and considerable enthused reaction from the customers.

Monro, who has often been compared to Sinatra, Darin, Damone etc., particularly due to his performance on his recent disk hit on Warwick, "My Kind Of Girl," reveals a pleasant singing personality of his own.

His repertoire consists mainly of nice, memorable standards like "Let's Face The Music And Dance," "Like Someone In Love," "It's All Right With Me," "Like Someone In Love," and "The Party's Over," and he turns these in polished fashion. The chanter also does a neat turn with "My Kind Of Girl," and his newest disk "Why Not Now," which is already getting good action in some territories.

If there's a drawback to Monro's performance it's in his lack of a prepared act. He gives the impression of doing the songs off the top of his head. What the act needs is more pacing and perhaps more drive. A good special material bit, "I'm A Limey," done with bowler hat is not a suitable opener and a reprise of the disk hit, "My Kind Of Girl," doesn't come off as a curtain call windup. But these are slight matters that can be ironed out. The basic talent and personality are both there. – Red Grevatt

From the back cover: Glancing at Matt's background it is almost inconceivable to visualize how he was able to elevate himself to a top position in the musical world. He enlisted in the army at 17 and this was when he first became interested in singing. With the exception of a few talent contests, however, his time in the service was spent as an instructor on tanks. While posted in Hong Kong he entered a talent contest which he proceeded to win six weeks consecutively at which time he was barred – in order to give the other competitors a fair chance.

After having his own radio show briefly Matt was discharged from the service and became a truck driver, on the London to Glasgow run. While in Scotland he cut a demonstration record for personal use only and then returned to London to become a bus driver. After a while he received an encouraging offer of a recording contract and things seemed to finally be falling into place. He was offered a radio series in Luxembourg, was featured with the well known Cyril Stapleton Band on BBC and did many major television shows. But once again fate stepped in and Matt seemed to lapse into obscurity, despite this spurt of popularity.

Then a man named George Martin stepped into Matt's life. Mr. Martin, the recording manager of Parlophone and the producer of this album, employed Matt to do an impersonation of Frank Sinatra on a new LP. So perfect was his recording that it was decided to include him in the album, however, he was not allowed to be identified as Matt Monro and instead was given the name of Fred Flange, rising to fame as the man who fooled the experts into thinking this was really Sinatra in action. Eventually the secret leaked out and Matt finally regained his stature as an artist and became in great demand for night clubs, television, and guest appearances. These appearances even included a personal invitation from President Eisenhower's air crew to sing for them at the Pentagon... this was a first!

At the end of 1960 success surrounded Matt and his second record "Portrait of My Love" soared to the top ten on the English hit parade. Early in 1961 Warwick Records president Morty Craft paid a visit to George Martin of Parlolphone and the fate of Matt Monro was once again altered. These two top record producers from different continents banded together for one common cause... to make the voice of Matt Monro number one throughout the world and success has been their reward. After months of hard work Morty Craft was able to bring his discovery to the top of the hit parade here in the United States with Matt's "My Kind Of Girl" and George Martin has continued keeping Matt in the top ten in England. – Notes by Lois G. Van Duyne

Let's Face The Music And Dance
Portrait Of My Love
Love Is The Same Anywhere
No One Will Ever Know
I'll Dream Of You
My Kind Of Girl
Come Sta
Cheek To Cheek
Mirage
April Fool
There Are No Words For Love
Posted by By Mark Betcher at 2:09 PM