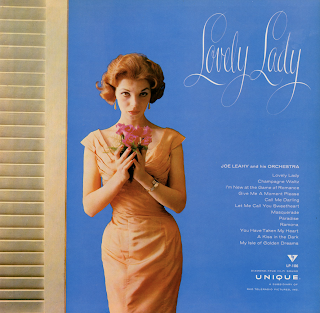 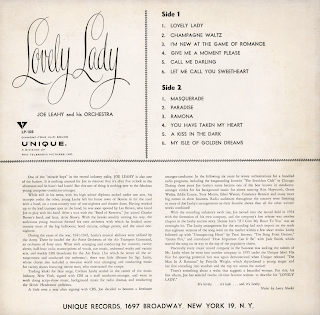 LP-106 was marketed in a 1956 issue of  Billboard featuring different cover art.

From the back cover: While still in his teens, with his high school diploma tucked under one arm, his one arm, his trumpet under the other, young Leahy left his home town of Boston to hi the road with a band, on a cross-country tour of one-nighters and theatre dates. Having worked up to the lead trumpet spot in the band, he was soon spotted by Les Brown, who hired Joe to play with his band. After a tour with the "Band of Renown," Joe joined Charlie Barnet's band, and later, Artie Shaw's. With the breaks steadily coming his way, the ambitious young musician formed his own orchestra with which he booked cross-country tours of big ballrooms, hotel circuits, college proms, and the usual one-nighters.

During the years of the war, 1941-1945, Leahy's musical abilities were utilized by the Army. There he headed the Air Force Orchestra of the Air Transport Command, an orchestra of forty men. What with arranging and conducting for concerts, variety acts, and weekly CBS broadcasts for the Air Force (for which he wrote all the arrangements and conducted the orchestra), there was little idleness for Sgt. Leahy, whose chores also included a two-year world tour arranging and conducting music for variety shows featuring movie stars who entertained the troops.

Trading khaki for blue serge, Civilian Leahy settled in the center of the music industry, New York, signed with CBS as a staff conductor-arranger, and went to work doing script-show music, background music for radio dramas and conducting the Sketch Henderson orchestra.

A little over a year after signing with CBS, Joe decided to become a freelance arranger-conductor. In the following six years he wrote orchestrations for a hundred radio programs, including the longstanding favorite "The Breakfast Club" in Chicago. During those years Joe Leahy's name became on of the best known in conductor-arranger circles for his background music for shows starring Rita Hayworth, Orson Wells, Eddie Cantor, Tony Martin, Ethel Waters, Constance Bennett and many more big names in show business. Radio audiences throughout the country were listening to more of Joe Leahy's arrangements on their favorite shows than all the other writers' works combined!

With the recording industry's swift rise, Joe moved into the record field in 1954 with the formation of his own company, and the company's first release was another chapter in the Leahy success story. Denise Lor's "If I Give My Heart To You" was an overnight hit. The Leahy arrangement of the recording had such impact on the trade that eighteen versions of the song were on the market within a few short weeks. Leahy followed up with "Unsuspecting Heart" by Terri Stevens, "The Song From Desiree," "Green Fire," and introduced "How Important Can It Be" with Jack Smith, which started the song on its way to the top of the popularity charts.

Practically every major record company in the business was seeking the talents of Mr. Leahy when he went into another company in 1955 under the Unique label. His flair for spotting potential hits was again demonstrated when Unique released "The Man In A Raincoat" by Pricilla Wright, which skyrocketed a young singer and her first recording into stardom and top ten across the nation!

There's something about a waltz that suggests a beautiful woman. For this, his first album, Joe has selected twelve all-time favorite waltzes to describe his "Lovely Lady." – Notes by Larry Meeks

Lovel Lady
Champagne Waltz
I'm New At The Game Of Romance
Give Me A Moment Please
Call Me Darling
Let Me Call You Sweetheart
Masquerade
Paradise
Ramona
You Have Taken My Heart
A Kiss In The Dark
My Isle Of Golden Dreams
Posted by By Mark Betcher at 9:54 AM