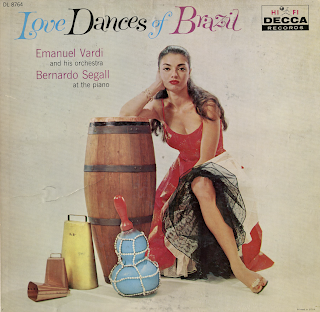 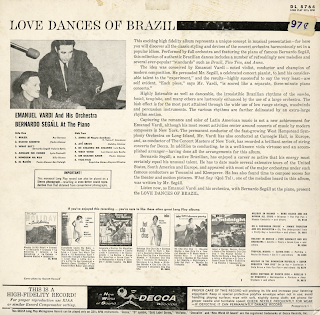 From the back cover: Bernardo Segall, a native Brazilian, has enjoyed a career so active that his energy must certainly equal his unusual talent. He has to date made several extensive tours of the United States, South America and Europe, and appeared with most of the major orchestras under such famous conductors as Toscanini and Klemperer. He has also found time to compose scores for the theater and motion pictures. What Say (Que Gal), one of the melodies heard in this album was written my Mr. Segall.

Capturing the romance and color of Latin American music is not a new achievement for Emanuel Vardi, although his most recent activities center around concerts of music by modern composers in New York. The permanent conductor of the fast-growing West Hempstead Symphony Orchestra on Long Island, Mr. Vardi has also conducted at Carnegie Hall, in Europe, and, as conductor of The Concert Masters Of New York, has recorded a brilliant series of string concerts for Decca. In addition to conducting, he is a well-known viola virtuoso and an accomplished arranger – having done all the arrangements for this album.