Take It From Me - Terry Gibbs 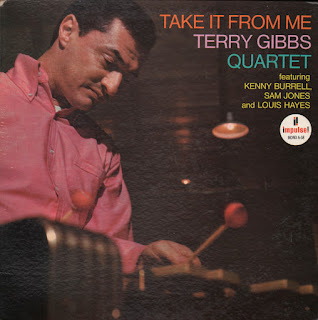 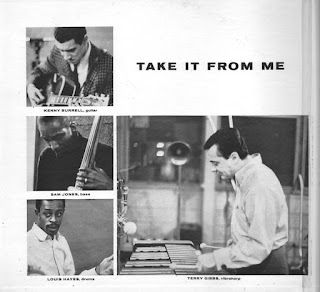 Book-fold jacket featuring the inside photo layout as seen above.

From Billboard - September 12, 1964: Swinging', ring-a-ding-dinging' jazz excitingly served up by Vibist Terry Gibbs in collaboration with Kenny Burrel on guitar; Sam Jones on bass; and Louis Hayes on drums. The sound and temp are bright and creative and a listening delight. The name of Gibbs and Burrell are enough to carry this LP salewise. The songs included will also do much along this line.

From the jacket notes: Terry Gibbs, a composer as well as a vibist, has constantly been involved with musically progressive ideas in the small group field and in his work with his own large workshop-type band on the West Coast. He has been a vital performer with an inborn beat from the time he managed, as a twelve-year old Brooklyn boy, to drum through The Flight Of The Bumble Bee in forty-five seconds, to win a Major Bowes Amateur Hour. His solo work on the vibes has been heard with the bands of Benny Goodman, Woody Herman, Buddy Rich, Tommy Dorsey, and with innumerable small combinations under his own name. His activities for the past four years have been devoted to his all star big band in Hollywood.

Honey Suckle Rose
El Fatso
Take It From Me
Gee Dad, It's A Deagan
One
Pauline's Place
8 lbs. 10 ozs.
All Things You Are