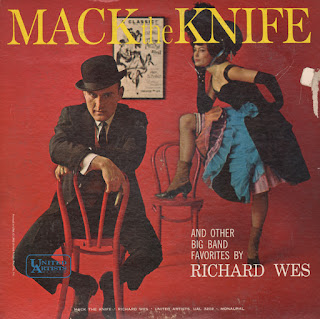 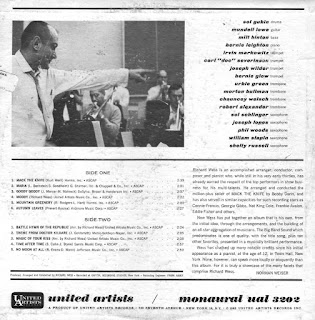 From the back cover: Richard Wess is an accomplished arranger, conductor, composer and pianist who, while still in his very early thirties, has already earned the respect of the top performers in show business for his multi-talents. He arranged and conducted the million-plus seller of Mack The Knife by Bobby Darin, and has also served in similar capacities for such recording stars as Connie-Francis, George Gibbs, Nat King Cole, Frankie Avalon, Eddie Fisher and others.

Now Wess has put together an album that is his own, from the initial idea, through the arrangements, and the building of an all-star aggregator of musicians. The Big Band Sound which predominates is one of quality, with the title song, plus ten other favorites, presented in a musically brilliant performance.

West has chalked up many notable credits since his initial appearance as a pianist, at the age of 12, in Town Hall, New York. None, however, can speak more loudly or eloquently than this album. For it is truly a showcase of the many facets that comprise Richard Wes. – Norman Weiser

Mack The Knife
Maria
Goody Goody
Moody
Mountain Greenery
Autumn Leaves
Battle Hymn Of The Republic
Theme From Doctor Kildare
Magic Of Your Kiss
Time After Time
No Moon At All
Posted by By Mark Betcher at 5:43 AM