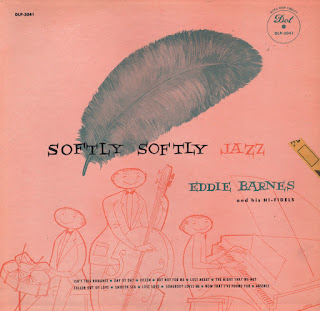 From Billboard - January 19, 1957: The Hi-Fidels consist of Barnes on bass, Bay Perry, drums and Joe Knight, piano. The trio works over a number of torch, lazy mood ballads in almost a cocktail lounge style. Individual flights are few with the spotlight largely falling on Barnes' rather throaty, deep down bass vocalizing. Jazz, in the strict sense at least, is almost a misnomer here. Nevertheless, tunes are agreeable and some may find them okay for background purposes. Market, however, would have to be called limited here.

From the back cover: Eddie Barnes: The bassist and vocalist with The Hi-Fidels, was born in Beaumont, Texas, March 22, 1924. He started singing while attending school and sang regularly with both the school choir and band. After leaving school he vocalized professionally in the club circuits on the west coast. He served three years with the U.S. Army and upon being discharged (1946) headed for New York.

Eddie has recorded with many of the major companies here in the east, and has two Town Hall Concerts to his credit: – one with Theolonius Monk at Piano and Oscar Pettiford, Bass. He played with many good jazz groups, outstanding of which was Tiny Grimes.

Bay Perry (Drums): A Bostonian who comes from a musical family. Many jazz fans will remember the late Ray Perry (alto saxophone and violin with Lionel Hampton's orchestra). There is another brother, Joe, who is keeping things musically moving up in bean town. Bay has travelled extensively and has, during lapses in touring, squared away to study serious percussion.

The jazz groups he has played with attest to the fact that he has plenty of jazz experience – Howard McGhee, Theolonius Monk, Mary Lou Williams.

Joe Knight (Piano): A 34 year old Brooklynite, who until 1945 did not know he was destined to be a professional musician. In 1947, he joined the Hot Lips Page band as a pianist and from then on came a whirlwind of unexpectancies – in 1948. Don Redman, Pete Brown. In 1952 he joined Earl Bostic and really put in some mileage. In 1953 he joined Lucky Thompson at the Savoy Ballroom. Since 1953, Joe resumed serious piano studies in the approach to jazz, has given the trip a real subtle sound.

Isn't That Romance?
Day By Day
Eileen
But Not For Me
Lost Heart
The Night That We Met
Fallen Out Of Love
Smooth Sea
Lost Love
Somebody Loves Me
Now That I Found You
Absence
Posted by By Mark Betcher at 5:57 PM