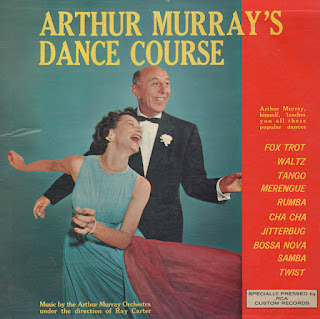 
From Billboard - February 20, 1960: An extremely marketable group of sets, which can acquire more salability due to the opportunity of consistently plugging Murray's TV show. The group of four cover just about every popular dance step, and the back cover of each gives instructions and footwork diagrams for the dance covered in that particular album. The music is nicely performed by Ray Carter and the Murray Ork. Each cover shows the famous couple on the dance floor. These have solid merchandising value singly, or as a group.
Posted by By Mark Betcher at 3:51 PM